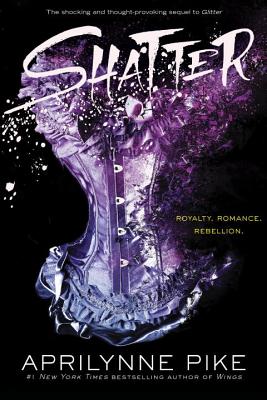 Breaking Bad meets Marie Antoinette in a near-future world where the residents of Versailles live like it's the 1700s--this sequel to Glitter by #1 New York Times bestselling author Aprilynne Pike will leave readers shocked!

Danica planned to use beauty, blackmail, and a glittering drug to control her own fate. Her escape from the twisted world of the Palace of Versailles was perfectly orchestrated and paid for. Or so she thought.

Betrayed by the man who had promised her freedom, Dani is now married to the murderous king. It's a terrifying position to be in . . . and yet it's oddly intoxicating. Power may be an even stronger drug than Glitter--a drug Dani can't resist, in the form of secrets, manipulation, and sabotage.

In her new position at the head of the court, Dani must ask herself who she really is. Can she use her newfound power to secure her real love, Saber's freedom, and a chance at a life together outside the palace? Or is being queen too addictive to give up?

Aprilynne Pike is the critically acclaimed, #1 New York Times and internationally bestselling author of the Wings series. She has been spinning stories since she was a child with a hyperactive imagination. She received her BA in creative writing from Lewis-Clark State College in Lewiston, Idaho. She lives in Arizona with her family. Visit her online at aprilynnepike.com and follow her on Twitter at @AprilynnePike.
Loading...
or support indie stores by buying on