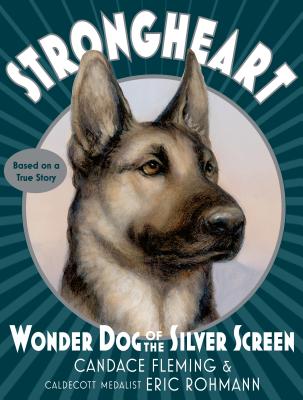 Wonder Dog of the Silver Screen

For fans of Balto and other real-life dog stories, here's a heavily illustrated middle-grade novel about a canine movie star of the 1920s, dramatically told in both words and pictures by an acclaimed author and a Caldecott Medal-winning illustrator.

When movie director Larry Trimble travels to Berlin searching for his next big star--a dog!--he finds Etzel, a fierce, highly trained three-year-old German shepherd police dog. Larry sees past the snarls and growls and brings Etzel back to Hollywood, where he is renamed Strongheart. Along with screenwriter Jane Murfin, Larry grooms his protégé to be a star of the silver screen--and he succeeds, starting with Strongheart's first film, The Love Master, which is released in 1921. Strongheart is soon joined by a leading lady, a German shepherd named Lady Julie, and becomes a sensation.

Touching, charming, playful, and based on real events, this moving tale by Candace Fleming and illustrated by Eric Rohmann tells all about "the wonder dog" who took America by storm.

Candace Fleming is the prolific author of The Family Romanov, a Robert F. Sibert Honor Book and the recipient of both the Boston Globe-Horn Book Award and the Los Angeles Times Book Award for Young Adult Literature; Amelia Lost, which received four starred reviews; The Great and Only Barnum, nominated for an ALA-YALSA Award for Excellence in Nonfiction and a Publishers Weekly and Booklist Best Book of the Year; The Lincolns, a Boston Globe-Horn Book Award recipient; Our Eleanor, an ALA Best Book for Young Adults; and Ben Franklin's Almanac, a James Madison Honor Book. She is also the author of many highly acclaimed picture books, including Oh, No!, illustrated by Eric Rohmann, and middle-grade books, including Ben Franklin's in My Bathroom! and The Fabled Fourth Graders of Aesop Elementary School. You can follow Candace Fleming on Twitter at @candacemfleming and visit her at candacefleming.com.

Eric Rohmann is a painter, printer, and fine bookmaker. He is the author/illustrator of the Caldecott Medal-winning My Friend Rabbit and the Caldecott Honor Book Time Flies. He and Candace Fleming have collaborated on numerous acclaimed children's books, including Giant Squid and Oh, No!, recipient of three starred reviews. Visit him at ericrohmann.com.

Praise For Strongheart: Wonder Dog of the Silver Screen…

"With the story’s most incredible plot developments based on fact, this fascinating and heartwarming piece of historical fiction will be met with wonder."—Booklist, starred review
or
Not Currently Available for Direct Purchase
Copyright © 2020 American Booksellers Association