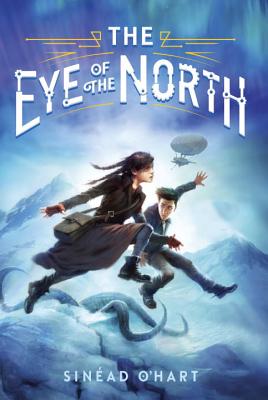 The Eye of the North

For fans of Karen Foxlee’s Ophelia and the Marvelous Boy comes a rollicking debut about a young girl’s adventures in the far reaches of the icy north.

When Emmeline’s scientist parents mysteriously disappear, she finds herself heading for a safe house, where allies have pledged to protect her. But along the way, she is kidnapped by the villainous Doctor Siegfried Bauer, who is bound for the ice fields of Greenland. There he hopes to summon a mystical creature from the depths of the ancient glaciers, a creature said to be so powerful that whoever controls it can control the world. Unfortunately, Bauer isn’t the only one determined to unleash the creature. The North Witch has laid claim to the mythical beast, too, and Emmeline—along with a scrappy stowaway named Thing—may be the only one with the power to save the world as we know it. Can Emmeline face one of the greatest legends of all time—and live to tell the tale?

Sinéad O’Hart lives in County Sligo—the wild northwest of Ireland—known as “Yeats country” because of its influence on the great poet. She has been many things, including a butcher’s assistant, a travel adviser, a writing instructor, an English tutor, a bookseller, and a proofreader, but the only thing she has ever really wanted to be is a reader and a writer. Sinéad holds a PhD in Old and Middle English language and literature, which is a useful source of story material. You can find her on social media at @SJOHart and sjohart.tumblr.com.
Loading...
or
Not Currently Available for Direct Purchase