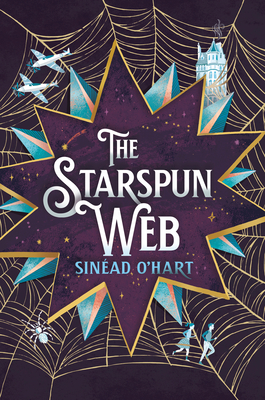 For fans of Ophelia and the Marvelous Boy comes a thrilling adventure about a brave girl who finds a portal to parallel worlds, and must protect her secret from the evil forces trying to capture it.

All her life, Tess has lived at Miss Ackerbee's orphanage with her friends and her pet tarantula, Violet. But one day, a mysterious man named Mr. Cleat shows up and whisks Tess away to live with him. Before Tess leaves, Miss Ackerbee gives her a strange lens, and makes an even stranger admission: that Tess can travel to parallel worlds, and has been able to do so since she was found as a baby. Now, with her newfound abilities and the mysterious lens in tow, Tess must navigate life with Mr. Cleat and his nefarious housekeeper, who seem to be up to more than they let on. As Tess learns about the lens and its role in transporting her to other worlds, she discovers that behind Mr. Cleat's oily smiles is a darker intention: one that could bring the world to its feet. Can Tess keep her secret from Mr. Cleat, and figure out what he's up to? And what if the lens falls into the wrong hands? With the help of Violet and her friends from the orphanage, Tess can finally discover the truth about Mr. Cleat and, more importantly, herself.

Praise For The Starspun Web…

“Does a marvelous job building a familiar but slightly strange world, filled with intrigue and possibility." —Booklist

Sinéad O'Hart is Irish, and lives in County Sligo, in the wild northwest of Ireland, known as "Yeats Country" because of its influence on the great poet. She has been many things, including a butcher's assistant, a travel adviser, a writing instructor, an English tutor, a bookseller, and a proofreader, but the only thing she has ever really wanted to be is a reader and a writer. She has a PhD in Old and Middle English language and literature, which is a useful source of story material. She is active on social media at @SJOHart and sjohart.tumblr.com.
Loading...
or
Not Currently Available for Direct Purchase