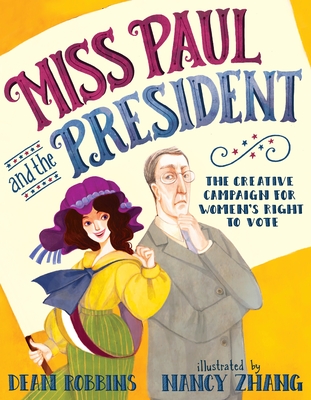 Miss Paul and the President

The Creative Campaign for Women's Right to Vote

"Robbins makes clear for a quite young audience through both main narration and endnote that there were very specific obstacles that had to be overcome to extend the vote to women, and winning the endorsement of the president was a vital first step."
--The Bulletin of the Center for Children's Books

"A perfect introduction to a notable woman and her fight for a woman’s right to vote."
--School Library Journal


Cast your vote for Alice Paul! The story of a tireless suffragette and the president she convinced to change everything.

When Alice Paul was a child, she saw her father go off to vote while her mother had to stay home. But why should that be? So Alice studied the Constitution and knew that the laws needed to change. But who would change them?

She would! In her signature purple hat, Alice organized parades and wrote letters and protested outside the White House. She even met with President Woodrow Wilson, who told her there were more important issues to worry about than women voting. But nothing was more important to Alice. So she kept at it, and soon President Wilson was persuaded.

Dean Robbins and illustrator Nancy Zhang bring the unsung hero to vivid life and show young voters-to-be how important it is to never back down from a cause you believe in!

Dean Robbins is a journalist and children’s book author. His first book, Two Friends: Susan B. Anthony and Frederick Douglass, was illustrated by Sean Qualls and Selina Alko. He lives in Madison, Wisconsin, with his family. Visit him at deanrobbins.net.

Nancy Zhang is a fashion illustrator whose work was featured in the Sew Zoey series. This is her first picture book. She lives in Germany. See more of her work at nancy-zhang.com.
Loading...
or
Not Currently Available for Direct Purchase