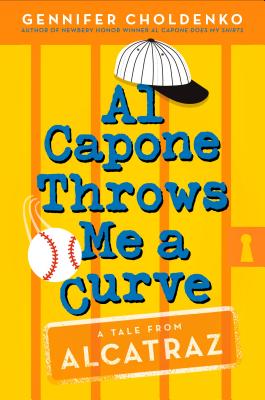 Al Capone Throws Me a Curve (Tales from Alcatraz #4)

Return to Al Capone's Alcatraz with Newbery Honor-winning author Gennifer Choldenko in this charming addition to the beloved series about the son of a prison guard.

Moose Flanagan lives on a famous island in California: Alcatraz, home to some of the most dangerous prisoners in the United States in the 1930s. It's the summer before he starts high school, and Moose is going to play a lot of baseball and win a spot on the high school team. But he still needs to watch his special older sister, Natalie--and then the warden asks Moose to look after his two-faced, danger-loving daughter, Piper.

In the cell house there are rumors that the cons will a strike, and that Moose's father might step up to a new job. Moose is worried: What will this mean for their family, especially for Natalie, who's had some scary run-ins with prisoners? Then the unthinkable happens: Natalie winds up someplace she should never, ever go. And Moose has to rescue her.

"This worthy 'second ending' finishes on a hopeful note that series fans will embrace."—Booklist, Starred review

"It's earnest Moose, always striving to do the right thing, who elevates this tale, like a hard-hit baseball, into the stratosphere."—Kirkus Reviews, Starred review

"A powerful story of love and family that will please fans and newcomers."—School Library Journal

"Choldenko continues to effectively develop the vivid historical setting (explained in greater depth in the back matter) as well as the tightly woven community."—The Horn Book Magazine

Gennifer Choldenko was the youngest in a family of four kids, where her nickname was “Snot-Nose.” Her quirky sense of humor made its debut at the dinner table when Gennifer was a very little kid. She is the author of seven children’s books, including Notes from a Liar and Her Dog, a School Library Journal Best Book of the Year; If a Tree Falls at Lunch Period; and Al Capone Shines My Shoes.
Loading...
or
Not Currently Available for Direct Purchase