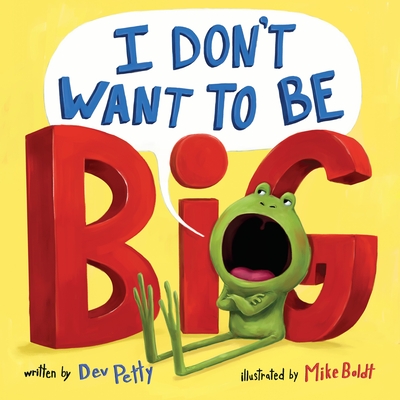 I Don't Want to Be Big

Fans of the hit picture book I Don’t Want to Be a Frog will love this silly companion featuring a frog that's still as stubborn as ever and his surprisingly patient father.

Frog does NOT want to grow up. Doesn’t need to be tall. Doesn’t want to be able to jump high enough to see the tree frogs. He’s just FINE being small. Besides, if you grow up, you don’t get to do fun things like jump in mud puddles with your best friend, Pig. Do you?

This hilarious story­—which uses humor to teach that it’s great being exactly who you are—is sure to bring a smile to every kid who just wants to stay a kid, in addition to those who are the smallest in their class. It’s a sly and smartly funny tale that will have children and parents laughing together.

Praise For I Don't Want to Be Big…

DEV PETTY is the author of I Don't Want to Be a Frog, I Don't Want to Be Big, There's Nothing to Do!, and I Don't Want to Go to Sleep. A graduate of the University of California, Santa Cruz, Dev previously worked as a visual-effects artist in film, contributing to such movies as the Matrix Trilogy. Dev was born and raised in Berkeley, California, and now lives right next door in Albany with her husband, two daughters, some dogs, and other critters. Visit her online at devpetty.com and on Twitter at @devpetty.

MIKE BOLDT is the New York Times bestselling illustrator of Just Try One Bite by Adam Mansbach and Camila Alves McConaughey. His numerous picture books include I Don't Want to Be a Frog, Don't Eat Bees, Bad Dog, and Find Fergus. When he's not drawing, he's building snow forts and Lego spaceships with his three kids at his home in rural Alberta, Canada, or sharing laughs and his ice cream with his wife. Follow Mike on Twitter at @MikeBoldt and on Instagram at @thatmikeboldt, and learn more about Mike at mikeboldt.ca.
Loading...
or support indie stores by buying on