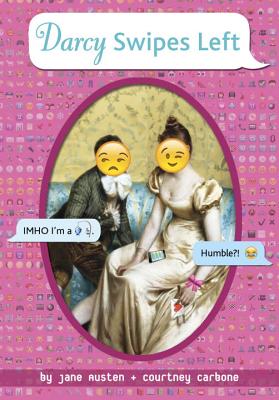 Pride and Prejudice, one of the greatest love stories ever told . . . in texts?!

Imagine: What if Lizzy Bennet and Mr. Darcy had smartphones and dated IRL (in real life)? A classic is reborn in this clever adaptation of Jane Austen’s Pride and Prejudice!

A truth universally acknowledged: a rich guy must want a wife.
A terrible first impression.
A couple that’s meant to be . . . if they can just get over themselves. #hatersgonnadate

tl;dr Jane Austen’s most famous novel told through its characters texting with emojis, posting photos, checking in at locations, and updating their relationship statuses. The perfect gift for any teen (or any reader with a sense of humor)!

A glossary and cast of characters are included for those who need it. For example: tl;dr means too long; didn’t read.

COURTNEY CARBONE studied English and creative writing in Baltimore before moving to New York City to become a full-time children’s book editor. When she isn’t collaborating with the greatest authors of all time, Courtney can be found studying various forms of comedy and thinking of ways to finish her author bio with a clever pun. . . . Visit her at CourtneyCarbone.com and follow her on Twitter at @CBCarbone.

JANE AUSTEN was born in England in 1775. Her best-known works are Pride and Prejudice, Sense and Sensibility, and Emma. Filled with wit and social commentary, Austen’s novels are not only critically acclaimed but also extremely popular. Her books are some of the most widely read and beloved in the English language.
Loading...
or
Not Currently Available for Direct Purchase