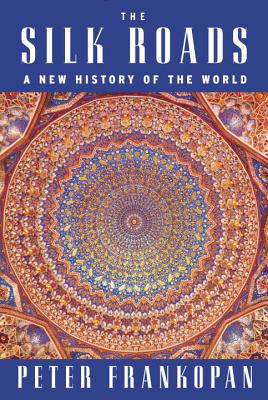 “This is history on a grand scale, with a sweep and ambition that is rare… A proper historical epic of dazzling range and achievement.” —William Dalrymple, The Guardian

It was on the Silk Roads that East and West first encountered each other through trade and conquest, leading to the spread of ideas, cultures and religions. From the rise and fall of empires to the spread of Buddhism and the advent of Christianity and Islam, right up to the great wars of the twentieth century—this book shows how the fate of the West has always been inextricably linked to the East.

Peter Frankopan realigns our understanding of the world, pointing us eastward. He vividly re-creates the emergence of the first cities in Mesopotamia and the birth of empires in Persia, Rome and Constantinople, as well as the depredations by the Mongols, the transmission of the Black Death and the violent struggles over Western imperialism. Throughout the millennia, it was the appetite for foreign goods that brought East and West together, driving economies and the growth of nations.

From the Middle East and its political instability to China and its economic rise, the vast region stretching eastward from the Balkans across the steppe and South Asia has been thrust into the global spotlight in recent years. Frankopan teaches us that to understand what is at stake for the cities and nations built on these intricate trade routes, we must first understand their astounding pasts. Far more than a history of the Silk Roads, this book is truly a revelatory new history of the world, promising to destabilize notions of where we come from and where we are headed next.

Praise For The Silk Roads: A New History of the World…

“This provocative history challenges the view of the West as heir to a pure Greco-Roman culture. For Frankopan, the brutish West owes its more enlightened traditions to the lands east of Italy and west of China, which were, for centuries, 'the centre of the world'… Frankopan marshals diverse examples to demonstrate the interconnectedness of cultures, showing in vivid detail the economic and social impact of the silk and the slave trades, the Black Death, and the Buddhist influence on Christianity.”
—The New Yorker

“In his new book, The Silk Roads, Frankopan has created something that forces us to sit up and reconsider the world and the way we've always thought about it… The book takes us by surprise right from the start.”
—Nishant Dahiya, NPR

“This is deeply researched popular history at its most invigorating, primed to dislodge routine preconceptions and to pour in other light. The freshness of… Frankopan’s sources is stimulating, and their sheer range can provoke surprising connections. He likes to administer passing electric shocks… The sheer abundance of Frankopan’s information can become an omnivorous pleasure, and its details add color and particularity to his text… He plunders data magnificently... A brave, subtly personal project of inspiring ambition and epic scope.”
—Colin Thubron, New York Review of Books

“Peter Frankopan… [is a] brilliant and fearlessly wide-ranging young Oxford historian… Frankopan marches briskly through the centuries, disguising his erudition with an enviable lightness of touch, enlivening his narrative with a beautifully constructed web of anecdotes and insights, backed up by an impressively wide-ranging scholarly apparatus of footnotes drawing on works in multiple languages... This is history on a grand scale, with a sweep and ambition that is rare… A remarkable book on many levels, a proper historical epic of dazzling range and achievement.”
—William Dalrymple, The Guardian

“One of Mr. Frankopan’s gifts as a storyteller is his ability to draw unusual connections across his vast canvas… [he] packs his tale with fascinating trivia… Frankopan has written a rare book that makes you question your assumptions about the world.”
—Sadanand Dhume, The Wall Street Journal

“Frankopan casts his net widely in this work of dizzying breadth and ambition… Those opening to any page will find fascinating insights that illuminate elusive connections across time and place…  Frankopan approaches his craft with an acerbic wit, and his epochal perspective throws the foibles of the modern age into sharp relief”
—Publishers Weekly (starred review)

“A glorious read. The author, the prodigious director of Oxford University’s Centre for Byzantine Research, weaves into his narrative astonishing facts…Frankopan is an exhilarating companion for the journey along the routes which conveyed silk, slaves, ideas, religion, and disease, and around which today may hang the destiny of the world.”
—Henry Porter, Vanity Fair.

“In his new book, The Silk Roads, Frankopan has created something that forces us to sit up and reconsider the world and the way we've always thought about it… The book takes us by surprise right from the start.”
—Nishant Dahiya, NPR

“Superb… Peter Frankopan is an exceptional storyteller… The lands of the Silk Roads are of renewed importance, and Frankopan’s book will be indispensable to anyone who wants to make sense of this union of past and present.”
—Philip Seib, The Dallas Morning News

“A sweeping, fascinating chronicle of world history focused on trade—in silk, spices, furs, gold, silver, slaves, and religion—in a vast region from the Mediterranean's eastern shores to the Himalayas… Frankopan weaves together his many narrative strands with verve and impressive scholarship. A vastly rich historical tapestry that puts ongoing struggles in a new perspective.”
—Kirkus (starred review)

"The author's gift for vividness is reminiscent of Jan Morris, while his command of revealing facts or fancies is not far short of Gibbon's."
—Felipe Fernández Armesto, Literary Review (U.K.)

“A very well-written and wide-ranging study, founded on reading of staggering breadth and depth... Strikingly up to date. The author has used the most recent scholarship to impressive effect... And he is evidently constantly rethinking in the light of new scholarship... The book is full of fascinating insights... No one could read it without learning a great deal, or without having their conception of the course of history radically challenged.”
—The Times Literary Supplement (U.K.)

“This is, to put it mildly, an ambitious book… By spinning all these stories into a single thread, Peter Frankopan attempts something bold: A history of the world that shunts the centre of gravity eastward… Mr. Frankopan writes with clarity and memorable detail… Where other histories put the Mediterranean at the centre of the story, under Mr. Frankopan it is important as the western end of a transcontinental trade with Asia in silks, spices, slaves—and ideas.”
—The Economist

“The Silk Roads, which covers several continents and many centuries, is based on astonishingly wide and deep reading and in all areas draws on the latest research… It is full of vivid and recondite details.”
—Robert Irwin, The Independent (U.K)

“Why are we driven, physically, intellectually and emotionally, to reach out beyond the horizon toward the unknown; to explore, connect and communicate? That query motivate Peter Frankopan’s splendid study… Throughout he relies on economic analysis…Recognizing that the fringes of the cloth are as interesting as its fabric, Frankopan also spins off on to the threads of social history…Underlying the tightly researched history is a grander human truth. As a species, we are motivated by stories… This invigorating and profound book has enough storytelling to excite the reader and enough fresh scholarship to satisfy the intellect… Charismatic and essential.”
—Bettany Hughes, The Daily Telegraph (U.K)

“Timely... It deserves a place by the library fireplace.”
—Country Life (U.K.)

“What does history look like if we shift our focus eastward and give due prominence to those who traversed the Silk Roads? This is the question Frankopan answers in this immensely entertaining work. Many books have been written which claim to be “A New History of the World”. This one fully deserves the title… So ambitious, so detailed and so fascinating… The Silk Roads demonstrates why studying history is so important.”
—Gerard DeGroot, The Times (U.K.) “Book of the Week”

“It’s time we recognized the importance of the East to our history, insists this magnificent study… The breadth and ambition of this swashbuckling history by Peter Frankopan should come as no surprise… A book that roves as widely as the geography it describes, encompassing worlds as far removed as those of Herodotus and Saddam Hussein, Hammurabi and Hitler… It is a tribute to Frankopan’s scholarship and mastery of sources in multiple languages that he is as sure-footed on the ancient world as he is on the medieval and modern… Deftly constructed… The Silk Roads is a powerful corrective to parochialism.”
—Justin Marozzi, The Sunday Times (U.K.)

“An exhilarating tour of 2,000 years of history… There is plenty of bang for your buck as you journey through The Silk Roads. Frankopan upends the usual world-history narrative oriented around ancient Rome and Greece and the irrepressible rise of Europe… In a series of brisk chapters—The Road of Faiths, The Road of Furs and so on—studded with state-of-the-art research that is sourced from at least a dozen languages, the author brings wondrous history to vivid life… In The Silk Roads, Peter Frankopan has provided a bracing wake up call.”
—Matthew Price, The National (AE)

PETER FRANKOPAN is a historian based at Oxford University. He is the author of The First Crusade: The Call from the East, a major monograph about Byzantium, Islam and the West in the eleventh and twelfth centuries. He is a senior research fellow at Worcester College, Oxford, and the director of the Oxford Centre for Byzantine Research at Oxford University. His revised translation of The Alexiad was published in the United States in 2009.
Loading...
or
Not Currently Available for Direct Purchase