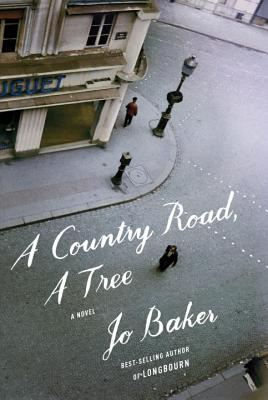 A Country Road, A Tree (Hardcover)

From the best-selling author of Longbourn, a haunting new novel of spies and artists, passion and danger, hope in the face of despair

Paris, 1939. The pavement rumbles with the footfall of Nazi soldiers marching along the Champs-Élysées. A young, unknown writer—Samuel Beckett—recently arrived from Ireland to make his mark, smokes one last cigarette with his lover before the city they know is torn apart. Soon he will put them both in mortal danger by joining the Resistance . . .

Through it all we are witness to the workings of a uniquely brilliant mind struggling to create a language that will express this shattered world. Here is a remarkable story of survival and determination, and a portrait of the extremes of human experience alchemized into one man’s timeless art.

JO BAKER was born in Lancashire and educated at Oxford University and Queen’s University Belfast. She is the author of Longbourn, a national best seller and New York Times Notable Book. Her previous novels are The Undertow, The Telling, The Mermaid’s Child and Offcomer. She lives in Lancaster, England.

Praise For A Country Road, A Tree: A novel…

“It is a daring project, to enter the mind of a man known for his withdrawal and silences, but Baker succeeds triumphantly in prose that is both intimate and austere . . . Unbearably poignant . . . Though Beckett kept characteristically quiet about it after the war, the raw material is nothing short of sensational: hiding up a tree to escape the Nazis, seeing a companion throw himself from a window to escape capture, digging a roadside grave for dead German soldiers, disguising a case of explosives with potted geraniums . . . Do you need to be interested in Beckett to engage with this novel? Well, as with the Longbourn servants, if you’re not, you should be, because again this is an extraordinary story that shines a light both on individuals caught up in the sweep of history and the way life is transmuted into art.” —The Guardian

“Jo Baker manages to offer a fresh perspective on World War II as well as an elegant imagining of one of art’s most enigmatic figures.” —Sunday Express (Best Books of the Month)

“Beautifully written, empathetic, and unflinching, it is very, very good . . . Longbourn threw a new light on Jane Austen’s Bennet sisters, but this homage to Beckett is far more daring and courageous, diving deep into the formative shifts in the writer’s psyche as he confronts the moral choices that the war posed.” —Daily Mail

“An exceptionally moving and enthralling piece of historical fiction . . . Before the reader is halfway down the first page, the endorphins are released and the mind smiles at the knowledge we are in great hands.”
—New York Journal of Books

“In this worthy successor to Longbourn, Baker skillfully captures Beckett’s world, the rhythms of his bare-bones prose, and the edginess of his point of view . . . Baker details how wartime experiences provide the key to Beckett’s transformation from Joyce disciple to distinctive literary voice.” —Publishers Weekly

“Baker builds a convincing case for how Beckett’s experiences in a world shattered by war shaped the dark, spare, tragicomic voice he developed to express the despair, absurdity, and surprising fortitude that characterize human existence.” —Heller McAlpin, LitHub

“I read Anthony Doerr’s All the Light We Cannot See just before beginning this book. Both novels are sensitive, well written, with great compassion for their characters . . . A Country Road, A Tree demonstrates, in impeccable detail, that even war can become the stuff of daily life.” —Minneapolis Star Tribune

“Baker’s historical drama deftly explores the psyche of one of the greatest writers of the twentieth century . . . Harrowing.” —Booklist

“A most enjoyable read. Baker’s Beckett is likeable, accessible, even, and A Country Road, A Tree is a stunning tribute to the life-changing experiences that shaped a literary giant . . . Baker wonderfully captures the toll of war . . . Beautifully precise and unadorned.” —Irish Independent

“The novel perfectly captures the deprivation, the despair, and the constant, creeping fear of an occupied people.” —Red magazine (This Month’s Must-Reads)

“A Country Road, A Tree is a revelation, a joy . . . A stunning historical novel . . . We know the real Beckett better by consuming his fictional portrayal here, as though we are privy to a lost diary from his youth.” —Stuff (New Zealand)

“The tension, the fear, the sheer grind of life under occupation and the toll that it takes are here. The story is beautifully paced, the research lightly worn.” —Irish Times
or
Not Currently Available for Direct Purchase
Copyright © 2020 American Booksellers Association