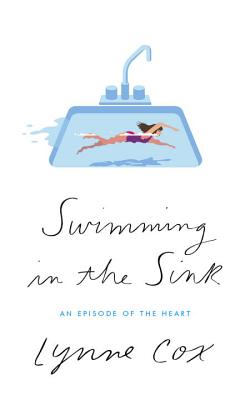 Swimming in the Sink (Hardcover)

An Episode of the Heart

From inspired and inspiring open-water swimmer and supreme athlete, able to endure cold water temperatures that would kill others, author of Swimming to Antarctica (“Riveting” —Sports Illustrated) and Grayson (“Moving, mystical” —People)—a powerful book about super athleticism and human frailty, about invincibility and the sudden (mind-altering) repercussions of illness, and about the triumph of spirit, surrender, and love.

Lynne Cox is an elite athlete who broke many world records, among them swimming the English Channel at fifteen, being the first woman to swim across Cook Strait (eighteen miles), and being the first to swim off Antarctica in 32-degree water—for twenty-five minutes!—all without a wetsuit.

And that’s where Swimming in the Sink begins—at a laboratory at the University of London, with Cox’s hand in ice-cold water, hooked up to thermocouples and probes, with three scientists trying to make sense of her extraordinary human capabilities. The test results paved the way for new medical and life-saving practices.

As an athlete, Cox had put her heart into everything she’d ever accomplished. In turn her heart gave her great physical strength and endurance.

In the midst of becoming the embodiment of a supreme endurance athlete, Cox took care of her elderly parents, both of whom passed away in quick succession, followed by the death of her beloved Labrador retriever, leaving Lynne in shock from loss and loneliness and soon literally suffering from the debilitating effects of a broken heart.

On the edge of a precipice, Cox was diagnosed with atrial fibrillation (AFib). As the prognosis went from bad to worse, Cox was in fear of living out a lesser life as an invalid with a pacemaker and a defibrillator and the real possibility of her own death was before her. Cox writes of her full surrender to her increasing physical frailty, to her illness, her treatment, her slow pull toward recovery.

In Swimming in the Sink we see Cox finding her way, writing about her transformative journey back toward health, and slowly moving toward the one aspect of her life that meant everything to her—freedom; mastery; transcendence—back to open waters, and the surprise that she never saw coming: falling in love.

LYNNE COX was born in Boston, Massachusetts, and grew up in Los Alamitos, California. She has held open-water swimming records all over the world, swimming without a wetsuit. Cox has been inducted into the International Swimming Hall of Fame. Her articles have appeared in many publications, among them The New Yorker, The New York Times, and the Los Angeles Times Magazine. Cox lives in Long Beach, California.

Praise For Swimming in the Sink: An Episode of the Heart…

Excitement about Lynne Cox’s
Swimming in the Sink

“A moving and absolutely inspiring read.”
—National Library Board

“Lyrical . . . Strong, resonant . . . Many more than just swimmers can appreciate and be inspired by Cox’s journey through terrifying, unfamiliar circumstances while maintaining determination and gratitude.”
—Kim Hedges, Star Tribune

“A powerful book about super athleticism and human frailty, about invincibility and the sudden (mind-altering) repercussions of illness and about the triumph of spirit, surrender and love.”
—Bainbridge Island Review

“Vivid . . . Straightforward and intimate . . . This satisfying journey through a world-class athlete’s heart-centered crisis is a warm tale of recovery and even finding love.”
—Publishers Weekly

“Cox brings both the unique perspective of an athlete who spent a lifetime exploring her physical limits and the determination of someone who braved painful research into the body’s ability to survive the cold. Her journey here proves the strength of her heart.”
—Bridget Thoreson, Booklist (Starred Review)

“Lynne Cox’s heart beats with magical new powers as she swims through the most personal challenge of her dazzling career. This lyrical book is an ode to water, to guts and—yippee!—to love. Dive in, now, for a most glorious adventure.
—Lynn Sherr, author of Swim: Why We Love the Water

“Told in straightforward language straight from the heart, Cox's story is a celebration of mindful living and a reminder that few things are ever permanently out of reach . . . Inspiring.”
—Kirkus Reviews

“I love this book. It is the best thing you have written . . . It will appeal to anyone who has made a large commitment to a dream that is big and large and all encompassing . . . You have turned from a swimmer who writes, to a writer who swims . . . The story will be read by many as an allegory of how to live one’s life with great heart and heal and forgive and stay close to people and things that are the most important in life . . . You have always had for me the message that we are all capable of more than we thought. You explored this up to and including risking life itself in the Antarctic and now, with this book, we get to see the heart that allowed these gifts to be brought to us. It is an amazing piece of work. Anyone who has suffered any kind of personal loss will be uplifted and encouraged by it.”
—Bill Wygant, President of the South End Rowing Club
or
Not Currently Available for Direct Purchase
Copyright © 2020 American Booksellers Association