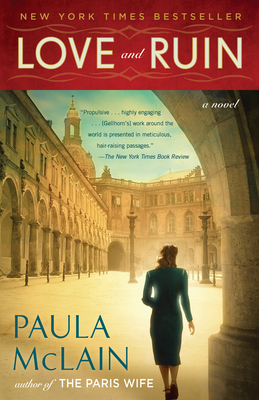 NEW YORK TIMES BESTSELLER • A powerful novel of the stormy marriage between Ernest Hemingway and Martha Gellhorn, a fiercely independent woman who became one of the greatest war correspondents of the twentieth century—from the author of The Paris Wife and When the Stars Go Dark


Praise For Love and Ruin: A Novel…

“In this heart-tugging follow-up [to The Paris Wife], we meet Martha Gellhorn, a correspondent during the Spanish Civil War, who was the third—and perhaps most intriguing—of [Hemingway's] wives. The title says it all.”—People

“Propulsive . . . highly engaging . . . McLain does an excellent job portraying a woman with dreams who isn’t afraid to make them real, showing [Gellhorn’s] bravery in what was very much a man’s world. Her work around the world . . . is presented in meticulous, hair-raising passages. . . . The book is fueled by her questing spirit, which asks, Why must a woman decide between being a war correspondent and a wife in her husband’s bed?”—The New York Times Book Review

“[The] scenes of professional rivalry and seesawing imbalance are some of McLain’s best. . . . McLain’s legions of fans will relish the inspiration of a gutsy woman who discovers she doesn’t need a man at her side, after all.”—The Boston Globe

“If you loved McLain’s 2011 blockbuster The Paris Wife, you’re sure to adore her new novel, which is just as good, if not better.”—AARP

“McLain’s strengths as a novelist are formidable, especially her ability to evoke a strong sense of time and place. . . . This novel is important not only as historical fiction but also as a reminder of the challenges that faced career-minded women such as Gellhorn in the mid-twentieth century. . . . McLain is also a master at ending chapters that make you want to turn the page and see what happens next.”—Houston Chronicle

“If love and war are two of the greatest themes in literature, they’re both here. . . . McLain’s dialogue, is, as Hem might say, good and true. She captures the passion Gellhorn and Hemingway feel for each other, and the slow erosion of trust on both sides.”—USA Today

“McLain takes another successful trip into historical fiction. . . . Readers will have to remind themselves that this is fiction as McLain draws a finely detailed portrait of the chaos and destruction spreading across Spain.”—St. Louis Post-Dispatch

“Engrossing . . . [Love and Ruin] spotlights a woman ahead of her time—a fearless reporter who covered the major conflicts of the twentieth century.”—Real Simple

“McLain’s ability to base a work of fiction on real people is nothing short of superb.”—BookPage

“Wonderfully evocative . . . This is historical fiction at its best, and today’s female readers will be encouraged by Martha, who refuses to be silenced or limited in a time that was harshly repressive for women.”—Library Journal (starred review)

Paula McLain is the New York Times bestselling author of the novels Love and Ruin, Circling the Sun, The Paris Wife, and A Ticket to Ride, the memoir Like Family: Growing Up in Other People’s Houses, and two collections of poetry. Her writing has appeared in The New York Times, Good Housekeeping, O: The Oprah Magazine, Town & Country, The Guardian, The Huffington Post, and elsewhere. She lives in Ohio with her family.
Loading...
or support indie stores by buying on