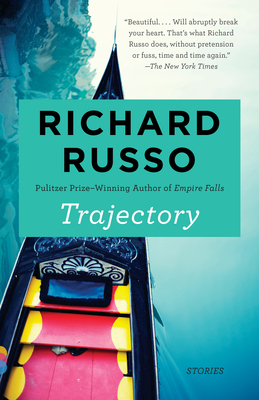 The characters in these four expansive stories are a departure from the blue-collar denizens that populate so many of Richard Russo’s novels; and all are bound together by parallel moments of reckoning with their pasts. In “Horseman,” a young professor confronts an undergraduate plagiarist—as well as her own regrets. In “Intervention,” a realtor facing a serious medical prognosis finds himself in his late father’s shadow. “Voice” gives us a semiretired academic who is conned by his estranged brother into joining a group tour of the Venice Biennale. And “Milton and Marcus” takes us into a lapsed novelist’s attempt to rekindle his screenwriting career—a career that depends wholly, at a crucial moment, on two Hollywood icons (one living, one dead). Shot through with Russo’s inimitable humor, wisdom, and surprise, Trajectory is the work of a masterful writer continuing to discover new heights.

In addition to a previous story collection, The Whore's Child, Richard Russo is the author of nine novels, most recently the best-selling Everybody's Fool and That Old Cape Magic, and the memoir Elsewhere. In 2002 he received the Pulitzer Prize for Empire Falls. He lives in Portland, Maine.

“Beautiful. . . . Will abruptly break your heart. That’s what Richard Russo does, without pretension or fuss, time and time again.” —The New York Times

“[A] collection of short fiction so rich and flavorsome that the temptation is to devour it all at once. I can’t in good conscience advise otherwise.” —Laura Collins-Hughes, The Boston Globe

“Has the engaging quality of tales told by a friend, over drinks, about a person we know in common. And so we lean forward, eager to hear what happened next.” —The New York Times Book Review

“Vibrant. . . Russo’s gift for character is as powerful as ever, enlivened with spot-on detail.” —People

“The four tales here are replete with Russo’s insightful studies of relationships. . . . Throughout, we enjoy Russo’s skill at weaving a story in which conflicted characters find moments of revelation and, sometimes, redemption. . . . . Rewarding and worth ruminating about.” —Minneapolis Star Tribune

“The stories in Trajectory are classic Russo, tales of minor-key defeat laced with rue and humor. . . . Russo again shows how adept he is at portraying life as a tragicomedy. . . . Gives readers plenty to enjoy and mull as his characters ponder their life trajectories.” —The Dallas Morning News

“Delightful. . . . Unearthing such insight on page 44 (instead of page 444) is a bit like watching a successful squeeze bunt score a runner from third—just as exciting as a home run, but a shorter trip and a rarer treat.” —Paste

“Intriguing and universal. . . . Russo newcomers will begin to scope out why he's a Pulitzer Prize winner.” —Houston Chronicle

“Heart-warming. . . . Absorbing. . . . A testament to Richard Russo’s skill at deploying his characters. . . . All four stories are challenging not because they are difficult—they are not—but because they raise questions about why we live our lives the way we do, and if that’s all right.” —The Washington Times

“Russo is a master at Everyman, offering common folks doing their best to get by, the cards often stacked against them. . . . This collection is a welcome edition to Russo’s work—if you haven’t delved into the Pulitzer prize-winning author’s books, do yourself a favor and begin.” —The Missourian

“Cogent, wry and satisfying. . . . Confirm[s] Russo’s status as one of the most justly celebrated American writers.” —Portland Press-Herald