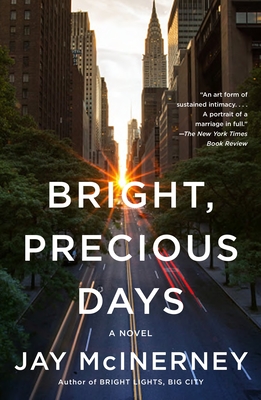 This unforgettable New York story of glamour, sex, ambition, and heartbreak begins in the heady days before the financial crash. Russell and Corrine Calloway seem to be living the dream: a calendar filled with high-society parties; jobs they care about and enjoy; twin children, a boy and a girl whose birth was truly miraculous; a loft in TriBeCa and summers in the Hamptons. But beneath the glossy surfaces, things are simmering. Russell, editor-in-chief of a boutique publisher, has cultural clout but is on the edge financially, and feels compelled to pursue an audacious—and potentially ruinous—opportunity. Meanwhile, Corrine’s world is turned upside down when the man with whom she’d had an ill-fated affair in the wake of 9/11 suddenly reappears, and the Calloways find themselves tested more severely than they ever could have imagined. The third book in McInerney’s celebrated Calloway trilogy, Bright, Precious Days is an aching, extraordinary portrait of a marriage during a period of dizzying change.

“An art form of sustained intimacy. . . . A portrait of a marriage in full.” —The New York Times Book Review

“McInerney is the writer who is funniest and most precise about the view from New York City.” —Harper’s

“McInerney delivers encounters and relationships, at times hilarious and exhilarating or excruciating between and among those individuals who are compelled to live nowhere else but on that tiny sliver of granite—Manhattan. Non-residents worldwide will enjoy the fates of these metropolitan dancers who wriggle, pop, squirm and sizzle under the searing red ray of McInerney’s magnifying glass.” —Dan Aykroyd

“In this powerful portrait of a marriage and a city in the shadow of the looming subprime mortgage crisis, McInerney observes the passage of life’s seasons with aching and indelible clarity.” —Booklist