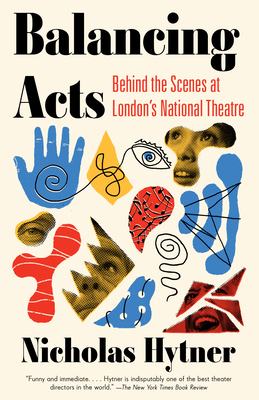 Behind the Scenes at London's National Theatre

Here is Nicholas Hytner’s fascinating, candid memoir of his tenure at the helm of Britain’s greatest theater. As artistic director of London’s National Theatre from 2003 to 2015, Hytner was in charge of three stages, directing and producing such plays and musicals as The Madness of George III, Rodgers and Hammerstein’s Carousel, Alan Bennett’s The History Boys, David Hare’s Stuff Happens, Richard Bean’s One Man, Two Guvnors, and War Horse, among many others.
Combining touches of gossip with serious insight into the processes that bring a production to life, Hytner discusses his major failures and spectacular successes. He looks at Shakespeare from every angle and writes about reinventing the classics; changing the public’s perception of what theater is in our times; balancing the idea of art with what will sell; encouraging new talent; and collaborating with actors and playwrights, including Richard Griffiths, Helen Mirren, Maggie Smith, Mike Leigh, Daniel Day-Lewis, Michael Gambon, Simon Russell Beale, Tom Stoppard, Alan Bennett, and Harold Pinter. Intimate and insightful, Balancing Acts is a passionate exploration of the art and alchemy of making theater.

Praise For Balancing Acts: Behind the Scenes at London's National Theatre…

“Funny and immediate and ring[s] true. . . . Hytner is indisputably one of the best theater directors in the world.” —The New York Times Book Review

“A masterclass in creative leadership. . . . As engrossing as it is entertaining.” —The Economist

“Absorbing. . . . Astute. . . . Should be read not simply by anyone who has an interest in British theatre, but anyone interested in that oldest of questions: how you make art that sells.” —The Guardian

“Engaging and illuminating.” —The New York Review of Books

“Hugely entertaining. . . . Hytner has a writer’s instinct for detail, drawing you into the room with luminaries such as Arthur Miller, John Gielgud, Alan Bennett. . . . He balances wit with intellectual gravitas, gossip with self-deprecation, and mischief with serious insight.” —Financial Times

“Balancing Acts is both history and illumination. . . .  Wonderfully lucid. . . .  Witty and entertaining. . . . Reveals both the ecstasy and the agony of staging large and ambitious shows.” —The Evening Standard

“A wonderful book: stimulating, intelligent, gossipy, heartfelt, affectionate, honest and, perhaps above all, fun.” —The Mail on Sunday

“Revelatory. . . . Full of anecdotes about the terrifying art of bringing a play alive, and full of insight about the sheer daredevil tightrope act that running the National Theatre involves. . . .  A vital reminder both of what theatre can do—and what is at stake if we take it for granted.” —What’s On Stage

““Hytner has produced a rare thing: an absorbing memoir by a director-turned-arts-administrator. . . . The insouciance of Balancing Acts is magic dust, sprinkled by a master Oberon.” —Standpoint

“A tremendous book about life in the theatre—and theatre, and life. Honest, shrewd and heartfelt. A classic of its kind.” —William Boyd, author of Sweet Caress

“An unqualified rave for this title. . . . The pages sparkles with luminaries with whom the author has worked. . . . Exquisitely written. . . . The theater crowd is the obvious audience for this book, but the intelligence, wit, and humor throughout expands the scope of readership to anyone interested in the arts.” —Library Journal (starred review)

“A captivating narrative. . . .  A detailed and stimulating look at the state of the art.” —Publishers Weekly

Nicholas Hytner is a theater director and producer. He was artistic director of London’s National Theatre from 2003 to 2015 and co-founded the London Theatre Company, whose first theater, The Bridge, opened in October 2017.
Loading...
or
Not Currently Available for Direct Purchase