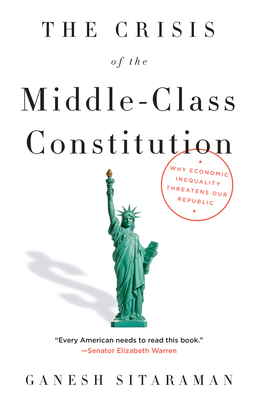 The Crisis of the Middle-Class Constitution

Praise For The Crisis of the Middle-Class Constitution: Why Economic Inequality Threatens Our Republic…

“In his fine book, both history and a call to arms, Ganesh Sitaraman argues that the contemporary explosion of inequality will destroy the American Constitution. . . . He has done all of us a great service, taking an issue of overwhelming public importance, delving into its history, helping understand how our forebears handled it and building a platform to think about it today.”  —Angus Deaton, The New York Times Book Review (cover review)

“Ganesh Sitaraman is a bold and visionary thinker whose new book, The Crisis of the Middle Class Constitution, shows that the disappearing American dream is more than a policy problem—it is a constitutional crisis. In our age of growing inequality, the stakes couldn’t be higher. Every American needs to read this book.” —Senator Elizabeth Warren

“Persuasive. . . . Sitaraman makes a convincing case that we all have a fundamental stake in a more equitable society, not just because it is more fair or more likely to promote happiness, but because the future of our democracy depends on it."  —David Cole, New York Review of Books

“The Crisis of the Middle-Class Constitution may well prove to be the most important political book of the year.”  —The Huffington Post

“Sitaraman’s valuable book invites a set of questions that it alone cannot resolve. But they are the right questions, and part of the proof is that they’re hard to answer.”  —The Nation

“In a wonderfully concise and well-documented chapter, ‘How Economic Inequality Threatens the Republic,’ [Sitaraman] explains the dynamics of rising inequality and its impact on the political system. . . .  [P]athbreaking exploration. . . . The book succeeds in its central objective: presenting a strong case that economic inequality isn’t just a matter of fairness or economic efficiency; it’s about the survival of our constitutional order. Americans who value the republic can only hope that judges, legislators and we the people take heed.”  —James Gray Pope, The Washington Post

“Mr. Sitaraman is onto an important insight, or at least a pressing question. Evidence from around the world strongly suggests that liberal constitutions do not fare well in countries with oligarchic social structures. Today, America's middle class is indeed beleaguered. . . . [This] book provides a much-needed reminder: For all our legendary good luck, nothing ordains that all our constitutional stories will have a happy ending.” —The Wall Street Journal

“Sitaraman provides us with a much-needed reminder of how economic inequality has been adjudicated in the past—and how it can be more effectively alleviated in the future.” —Win McCormack, The New Republic

“Sitaraman . . . brings a fresh eye and an impressive range of historical thinking to an ageless question: What are the conditions for freedom? He tours the intellectual struggles of the 19th and early 20th centuries, as progressives worked to reconcile industrialization and democracy. He gives us a glimpse of episodes that led to the progressive creation of the income tax, the development of antitrust laws and enforcement, the creation of a welfare state . . . and through the demise of those achievements—a generation in which we’ve reduced taxes, stopped investing in public infrastructure, and stopped enforcing antitrust. According to Sitaraman, we’ve lost the policies essential to the preservation of the middle class.” —Zephyr Teachout, The American Prospect

“Sitaraman provides a sweeping intellectual underpinning for the progressive agenda. . . . It remains to be seen whether Senator Warren, Senator Sanders or another progressive champion can change America’s political course in years ahead. Whoever emerges will presumably have Sitaraman’s work in mind.”  —America Magazine

“What Piketty was to economics, this book is to our constitutional tradition. Sitaraman uncovers the lost essence to our constitutional past, and renders it as important today as it ever was. His beautifully written and powerfully argued book will change the discourse of constitutionalism—for the better.” —Lawrence Lessig, author of Republic, Lost, and Furman Professor of Law and Leadership, Harvard Law School

“A pathbreaking effort to rethink the past, present, and future of American constitutional development.” —Bruce Ackerman, Sterling Professor of Law and Political Science, Yale University

“Ganesh Sitaraman has reached broadly into history, economics, and politics to provoke concern about the risks that wealth inequality poses to the stability of our constitutional system. This is a brilliantly inventive argument, especially sobering in light of the populism of the right and the left during the last presidential election.” —David K. Shipler, author of The Working Poor: Invisible in America

“Can American democracy survive the decline of the American middle class? With The Crisis of the Middle-Class Constitution, Ganesh Sitaraman has provided a strikingly original, provocative and timely intervention in this urgent debate.” —Michael Lind, author of Land of Promise: An Economic History of the United States

“American democracy cannot stand too much economic inequality. In fact, American democracy is built on a robust idea of economic fairness among citizens. In this new Gilded Age, these principles have been easy to neglect. In his timely and important book, Ganesh Sitaraman makes a strong case that economic fairness is a constitutional principle, and that if we give up on it, we will have given up on our democracy altogether. In making this argument, he gives readers a powerful and useful narration of the long American struggle for genuine self-government. He also pays close and valuable attention to the concrete reforms that can move us closer to real democracy.” —Jedediah Purdy, author of After Nature: A Politics for the Anthropocene and Everett Professor of Law, Duke University School of Law

GANESH SITARAMAN is Professor of Law at Vanderbilt Law School and a senior fellow at the Center for American Progress. He has been a longtime advisor to Senator Elizabeth Warren, serving as her policy director and senior counsel. Sitaraman has commented on foreign and domestic policy in The New York Times, The New Republic, The Boston Globe, and The Christian Science Monitor and is the author of The Counterinsurgent's Constitution: Law in the Age of Small Wars, which won the 2013 Palmer Civil Liberties Prize. He is a graduate of Harvard Law School, where he was an editor on the Harvard Law Review.
Loading...
or
Not Currently Available for Direct Purchase