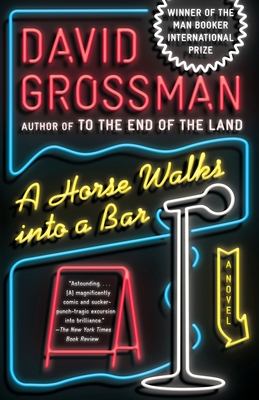 A Horse Walks Into a Bar

WINNER OF THE MAN BOOKER INTERNATIONAL PRIZE • From the bestselling author of To the End of the Land comes a searing story of loss and survival.

In a dive bar in a small Israeli city, Dov Greenstein, a comedian a bit past his prime, takes the stage for his final show. Over the course of a single evening, Dov’s patter becomes a kind of memoir, taking us back into the terrors of his childhood. And in the dance between comic and audience, a deeper story begins to take shape as Dov confronts the decision that has shaped the course of his life—a story that will alter the lives of several of those in attendance.

A Horse Walks Into a Bar is a poignant exploration of how people confront life’s capricious battering.

Praise For A Horse Walks Into a Bar: A novel (Vintage International)…

“Unsettling and mesmerizing. . . . As beautiful as it is unusual, and it’s nearly impossible to put down.” —NPR

“[Grossman] has transcended genre; or rather, he has descended deep into the vaults beneath. . . . This isn’t just a book about Israel: it’s about people and societies horribly malfunctioning.” —The Guardian

“As cunning and compelling as the stand-up guy at its center. In this funnyman’s sad, grotesque performance, Grossman reaffirms his power to entertain and unnerve.” —The Boston Globe

“A short, shocking masterpiece . . . in which absurdity and humour are used to probe the darkest corners of the human condition.” —The Sunday Times (London)

“[A] pitch-black comedy. . . . It takes an author of Mr Grossman’s stature to channel not a failed stand-up but a shockingly effective one, and to give him salty, scabrous gags that—in Jessica Cohen’s savoury translation—raise a guilty laugh.” —The Economist

“Grossman has once more proved himself as one of Israel’s finest literary alchemists. . . . An unsettling, cathartic, confessional stream-of-consciousness soliloquy.” —Haaretz

“[A] raw and fiercely emotional book.” —The Spectator

“In little more than 200 pages, Grossman brings us to the nerve center of his psyche.” —The Jerusalem Post

“Few writers hold a more unflinching mirror up to Israeli society than Grossman . . . But [his work] is also suffused with compassion, acutely attuned to the complexity of individual lives and the solutions people find to the challenge of that complexity.” —Financial Times

“A devastating work. . . . A lamentation and a plea for compassion and empathy. . . . A Horse Walks into a Bar is unlike anything Grossman has yet done.” —The Irish Times

David Grossman was born in Jerusalem. He is the author of numerous works of fiction, nonfiction, and children’s literature. His writing has appeared in The New Yorker and has been translated into more than forty languages. He is the recipient of many prizes, including the French Chevalier de l’Ordre des Arts et des Lettres, the Buxtehuder Bulle in Germany, Rome’s Premio per la Pace e l’Azione Umanitaria, the Premio Ischia international award for journalism, Israel’s Emet Prize, and the Albatross Prize given by the Günter Grass Foundation.

Jessica Cohen was born in England, raised in Israel, and now lives in the United States. She has translated contemporary Israeli fiction, nonfiction, and other creative works, including David Grossman’s To the End of the Land and Falling Out of Time.
Loading...
or support indie stores by buying on
(This book is on backorder)