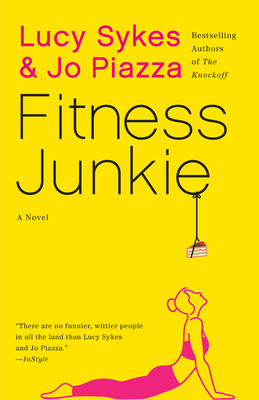 When Janey Sweet, CEO of a couture wedding gown company, is photographed in the front row of a fashion show eating a bruffin--the delicious love child of a brioche and a muffin--her best friend and business partner gives her an ultimatum: lose thirty pounds or lose your job. Sure, Janey has gained some weight since her divorce, and no, her beautifully cut trousers don't fit like they used to, so Janey throws herself headlong into the world of the fitness revolution, signing up for a shockingly expensive workout pass, baring it all for Free the Nipple yoga, and spinning to the screams of a Lycra-clad instructor with rage issues. As Janey eschews carbs, pays thousands of dollars to wellness gurus, and is harassed by her very own fitness bracelet, she can't help but wonder: Did she really need to lose weight in the first place?

"I was thrown into the diet and exercising regimen of the 0.01% and was barely able to exhale. Fitness Junkie moves furiously through the torturous extremes women subject themselves to, all in the name of pleasing someone else. Sykes and Piazza work their magic through the eyes of a woman more like yourself. Read this and you will never eat cronuts with a side of guilt again."
—Maureen Sherry, author of Opening Belle

JO PIAZZA is an award-winning reporter and editor who has written for the Wall Street Journal, The New York Times, the New York Daily News, New York Magazine, Glamour, Marie Claire, Elle and Salon. She has appeared on CNN, NPR, Fox News, the BBC and MSNBC. She received a master’s degree in Journalism from Columbia, a master’s degree in Religious Studies from NYU, and a bachelor’s degree in Economics from the University of Pennsylvania. She is also the author of the critically acclaimed If Nuns Ruled the World, Celebrity Inc: How Famous People Make Money, and How to Be Married: What I Learned from Real Women on Five Continents About Surviving My First (Really Hard) Year of Marriage. She currently lives in San Francisco with her husband and their giant dog.
Loading...
or
Not Currently Available for Direct Purchase