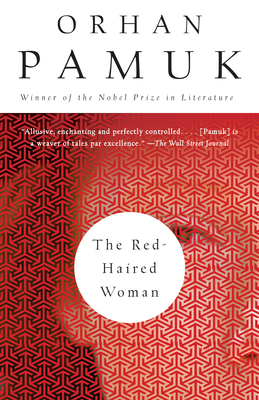 “'Beguiling' is the perfect word to describe The Red-Haired Woman, which feels like an entrancing fairly tale, set in a far away, exotic land peopled with fascinating men and women. The story plays out over the life span of one man whose actions and choices over one summer, however fleeting, will turn out to be the formative events that shape his entire life. I particularly enjoyed the summer nights in the quiet town, as the boy stole around the back alleys, hoping for a glimpse of the red-haired woman. This book is unlike any other I've read.”
— Jenny Lyons, The Vermont Book Shop, Middlebury, VT
View the List

From the Nobel Prize winner and best-selling author of Snow and My Name Is Red, a fable of fathers and sons and the desires that come between them.

On the outskirts of a town thirty miles from Istanbul, a well digger and his young apprentice—a boy fleeing the confines of his middle class home—are hired to find water on a barren plain. As they struggle in the summer heat, excavating without luck meter by meter, they develop a filial bond neither has known before. But when the boy catches the eye of a stunning red-haired woman who seems as fascinated by him as he is by her, the events that ensue change the young man’s life forever and haunt him for the next thirty years. A tale of family and romance, of youth and old age, of tradition and modernity, The Red-Haired Woman is a beguiling mystery from one of the great storytellers of our time.

Orhan Pamuk won the Nobel Prize for Literature in 2006. His novel My Name Is Red won the 2003 IMPAC Dublin Literary Award. His work has been translated into more than sixty languages.

“[Pamuk] is a weaver of tales par excellence.” —The Wall Street Journal

“A parable about present-day Turkey. . . . It blends the close observation of details with the broad brushstrokes usually associated with myth-making and fables.” —The Guardian

“Beautifully written . . . a thoughtful consideration of Western and Eastern myths of fathers and sons, and the limits of free will.” —Pittsburgh Post-Gazette

“Saturated with sympathy and sense of place. . . . This book sings with the power of diverse remembrance.” —Financial Times

“Extraordinary. . . . The reader feel[s] as if they’ve emerged from the depths of a well into sudden and dazzling light.” —The Observer

“Pamuk traces the disastrous effects of a Turkish teenager’s brief encounter with a married actress, elaborating on his fiction’s familiar themes: the tensions between East and West, traditional habits and modern life, the secular and the sacred.” —The New York Times Book Review

“Story-telling at its finest. . . . There is nothing more rewarding than reading a work by a master craftsman at the top of his game, nothing else like it at all.” —Counterpunch

“An ending that makes you immediately start the book all over again speaks for itself.” —The Sunday Times (London)

“It can fall to fiction to remind us of what has come before . . . a tale of slow-reveal secrets [and] love.” —Vogue

“The Red-Haired Woman drapes Turkey’s political situation in the language of myth, suggesting that the ancient pairs of Oedipus and Laius and Sohrab and Rostam may have company in the present.” —The New Yorker

“Engaging and deftly told. . . . Pamuk’s postmodern puzzles are meticulous as ever.” —Bookforum

“The allure that Pamuk evokes in this haunting tale of hardship, unrequited love, guilt, danger, dreams fulfilled and dreams destroyed is the stuff that Eastern literature tragedies are made of.” —Bookreporter

“Pared down, written with deliberate simplicity. . . . Polyphonic narratives are replaced by a powerful, engaging clarity.” —The Spectator

“Beautiful. . . . Pamuk masterfully contrasts East with West, tradition with modernity, the power of fables with the inevitability of realism.” —Booklist (starred review)
or support indie stores by buying on
Copyright © 2020 American Booksellers Association