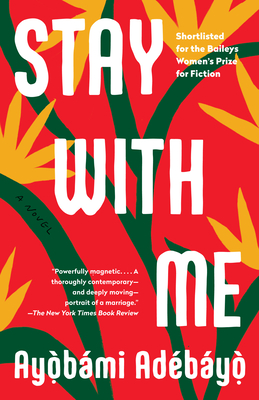 “Powerfully magnetic. . . . In the lineage of great works by Chinua Achebe and Chimamanda Ngozi Adichie. . . . A thoroughly contemporary—and deeply moving—portrait of a marriage.” —The New York Times Book Review

Ilesa, Nigeria. Ever since they first met and fell in love at university, Yejide and Akin have agreed: polygamy is not for them. But four years into their marriage—after consulting fertility doctors and healers, and trying strange teas and unlikely cures—Yejide is still not pregnant. She assumes she still has time—until her in-laws arrive on her doorstep with a young woman they introduce as Akin’s second wife. Furious, shocked, and livid with jealousy, Yejide knows the only way to save her marriage is to get pregnant. Which, finally, she does—but at a cost far greater than she could have dared to imagine.

The unforgettable story of a marriage as seen through the eyes of both husband and wife, Stay With Me asks how much we can sacrifice for the sake of family.

One of the Best Books of the Year: NPR, The Wall Street Journal, The Economist, Chicago Tribune, BuzzFeed, Entertainment Weekly, The New York Post, Southern Living, The Skimm

Shortlisted for the 2017 Baileys Women’s Prize for Fiction

Praise For Stay with Me: A novel…

“Powerfully magnetic. . . . In the lineage of great works by Chinua Achebe and Chimamanda Ngozi Adichie. . . . A thoroughly contemporary—and deeply moving—portrait of a marriage.” —The New York Times Book Review

“An absolute must-read and a story that will be shared for many decades to come.” —Emma Roberts, Refinery29

“[A] stunning literary work [that] serves as both astute political commentary and unfolding mystery.” —NPR

“Powerful storytelling. . . . The story is ancient, but Adebayo imbues it with a vibrant, contemporary spirit.” —San Francisco Chronicle

“Stay With Me feels like a genre unto itself—a story that illustrates the necessity of hope and equality, but one that doesn’t water down the challenges of realizing them.” —Vogue

“A debut that marks the beginning of what should be a stunning career.” —Goop

“Gorgeous. . . . Filled with big-hearted feelings and all kinds of female strength.” —Bustle

“A kind of addictive African soap opera, set against the political chaos of Nigeria in the 1980s.” —People

“A gut-wrenching tale of how wanting a child can wreck a woman, a marriage and a community. . . . Adebayo is surely a writer to watch.” —The Economist

“Heartbreaking. . . . A story of complicated love teetering between tradition and modernity.” —W Magazine

“A work of intimate yet powerful—and even, at times, shocking—storytelling that will . . . make your world bigger.” —Elle

“A bright, big-hearted demonstration of female spirit, as well as the damage done by the boundlessness of male pride.” —The Guardian

“With lyrical prose, Adebayo explores how far a woman will go to save her marriage.” —Real Simple

Ayobami Adebayo’s stories have appeared in a number of magazines and anthologies, and one was highly commended in the 2009 Commonwealth Short Story Competition. She holds BA and MA degrees in literature in English from Obafemi Awolowo University, Ife, and has worked as an editor for Saraba Magazine since 2009. Adebayo also has an MA in creative writing from the University of East Anglia, where she was awarded an international bursary for creative writing. She has received fellowships and residencies from Ledig House, Sinthian Cultural Centre, Hedgebrook, Ox-Bow School of Art, Ebedi Hills and the Siena Art Institute. She was born in Lagos, Nigeria.

1. Discuss the early stages of Yejide and Akin’s courtship, from both of their perspectives. What is Yejide’s initial reaction to Akin’s romantic propositions? Consider Yejide’s childhood and past that is revealed over the course of the novel. What does she seek in a romantic relationship? How does Akin provide security for her? How does Akin convince Yejide that he is trustworthy?

2. Consider the family unit as a social force in Stay with Me. How do the opinions of Akin’s family members influence his decisions? Describe the relationship between Akin and his parents. How does Akin both obey and defy the wishes of his family? How does Yejide navigate her role as a daughter-in-law?

3. In the beginning of Stay with Me, the reader is introduced to the central conflict of Yejide and Akin’s life: their infertility as a couple. How is Yejide and Akin’s childlessness seen as a reflection on the family unit? What is the burden of expectation placed on Yejide? How is she treated by Akin’s family as a result of her infertility? By the community? How do attitudes toward Yejide change once she is pregnant?

4. Discuss the road leading to Yejide’s first pregnancy. How do the social pressures to become a mother weigh on Yejide? Once Yejide learns that she is no longer Akin’s only wife, how does the urgency of her mission become more pronounced? Consider the barriers to her pregnancy, and what she learns about herself from the field remedies and the medical establishment. How does the psychological trauma that accompanies her journey weigh on her throughout the novel?

5. The tension between modern attitudes and traditional thought informs much of Stay with Me. How does Yejide and Akin’s early agreement of monogamy conflict with the prevailing social attitude? How does this create tension over the course of the novel? How does Yejide defy the wishes of her husband’s family? How does the eventual shift of parental responsibilities to Akin upend the expectations of motherhood and parenting?

6. Consider the identity of “mother,” and how understanding of that role shifts for Yejide over the course of the novel. How does the story of her mother’s death influence her worldview and her perspective on family? Discuss the relationship Yejide had with her father’s other wives. Which woman in her life, if any, provides her with an understanding of what a loving mother-child relationship looks like? Once she becomes a mother, how does her self-image change?

7. Describe Yejide’s relationship with Iya Bolu. How does Iya Bolu’s attitude toward Yejide shift over the years? When does Yejide seem to earn the most respect from Iya Bolu? When does she earn her sympathy?

9. The reveal of Akin’s medical condition is an important development in the plot. Given this revelation, would you consider Funmi’s death to be purposeful? How did you interpret his reaction to her accusation? How does Akin contend with threats to his masculinity throughout the novel?

10. Discuss the significance of the hair salon in Yejide’s life. How does it encourage her independence? How does it act as a place of gathering within their community?

11. Compare the bedtime story that Yejide tells her children with the tale that Akin shares with Rotimi as she grows. What do these stories reveal about the worldviews of both parents? What lessons are they sharing? How is it a cautionary tale between parent and child? How does it reflect Yejide’s own childhood experiences?

12. Discuss the process of mourning as depicted in Stay with Me. How does the community react to Yejide’s mourning for the loss of her first child versus her second? Discuss the general attitude towards Yejide’s depression from her family and those around her.

14. Discuss Yejide’s reunion with Rotimi. Were you surprised by this reveal? How did you interpret Timi’s insistence on calling Yejide “Moomi”?

15. Stay with Me is a novel that challenges readers’ expectations with its surprising reveals, its secrets, and its deception. What plot development did you find to be most surprising? How does Adebayo play with the idea of expectation versus reality throughout the novel?