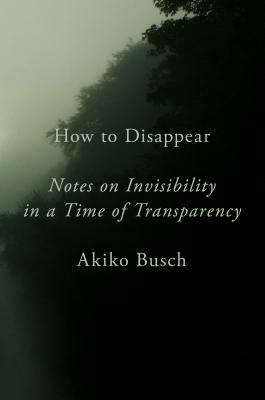 Notes on Invisibility in a Time of Transparency

It is time to reevaluate the merits of the inconspicuous life, to search out some antidote to continuous exposure, and to reconsider the value of going unseen, undetected, or overlooked in this new world. Might invisibility be regarded not simply as refuge, but as a condition with its own meaning and power? The impulse to escape notice is not about complacent isolation or senseless conformity, but about maintaining identity, autonomy, and voice.

In our networked and image-saturated lives, the notion of disappearing has never been more alluring. Today, we are relentlessly encouraged, even conditioned, to reveal, share, and promote ourselves. The pressure to be public comes not just from our peers, but from vast and pervasive technology companies that want to profit from patterns in our behavior. A lifelong student and observer of the natural world, Busch sets out to explore her own uneasiness with this arrangement, and what she senses is a widespread desire for a less scrutinized way of life—for invisibility. Writing in rich painterly detail about her own life, her family, and some of the world’s most exotic and remote places, she savors the pleasures of being unseen. Discovering and dramatizing a wonderful range of ways of disappearing, from virtual reality goggles that trick the wearer into believing her body has disappeared to the way Virginia Woolf’s Mrs. Dalloway finds a sense of affiliation with the world around her as she ages, Busch deliberates on subjects new and old with equal sensitivity and incisiveness.

How to Disappear is a unique and exhilarating accomplishment, overturning the dangerous modern assumption that somehow fame and visibility equate to success and happiness. Busch presents a field guide to invisibility, reacquainting us with the merits of remaining inconspicuous, and finding genuine alternatives to a life of perpetual exposure. Accessing timeless truths in order to speak to our most urgent contemporary problems, she inspires us to develop a deeper appreciation for personal privacy in a vast and intrusive world.

Praise For How to Disappear: Notes on Invisibility in a Time of Transparency…

“Coming upon [HOW TO DISAPPEAR] was like finding the Advil bottle in the medicine cabinet after stumbling about with a headache for a long time…For [Busch], invisibility is not simply a negative, the inverse of visibility. Going unseen, undetected, overlooked: These are experiences with their own inherent ‘meaning and power’; what we need is a ‘field guide’ for recognizing them. And this is what Busch offers, roaming from essay to essay in a loose, associative style, following invisibility where it takes her…Inconspicuousness can be powerful—this may be Busch’s most radical point, especially at a moment when we’re conditioned to think power means yelling louder than everyone else in your Twitter feed, or showing the world in Instagram how you’re living your best life…Silence and invisibility, [Busch insists], are part of our everyday lives—the place our mind wanders when we’re in the shower or out jogging, the feeling we get looking out the window of an airplane, the pleasure of becoming a stranger on a bustling city street. We take these pauses, these moments of exhalation, for granted, but we should clutch them close. They are our armor against the onslaught.”—Gal Beckerman, The New York Times Book Review (cover review)

“Akiko Busch’s How to Disappear: Notes on Invisibility in a Time of Transparency serves as a gentle reminder…[to] stop confusing what is most obvious or distracting for what is genuinely important. Almost everything that actually matters in life happens beneath the surface. Ms. Busch, who has rightly been compared to Annie Dillard and Edward Abbey, has dedicated nearly 30 years to sounding this message, one that our age seems intent on ignoring…It is precisely Ms. Busch’s subtle contrarianism that deserves our sustained attention….How to Disappear is, at least in part, a description of how the world might reappear to us if we weren’t so hellbent on overwhelming it…On the surface, How to Disappear is a palliative for the alienation that modern overexposure begets. Ms. Busch would like to save us from ourselves, from the lonely fate that afflicts Narcissus, his eyes forever locked on the only person he has ever truly loved—himself. But in its deeper moments, the book touches on an abiding, but easily forgotten, truth: Disappearing, the act of losing our selves, is a precondition of selflessness. Ms. Busch’s deeper concern is to save not Narcissus but rather the wider world his selfishness affects.”—John Kaag, Wall Street Journal

“In How to Disappear, Busch contemplates how government surveillance, smart technology, and our own desire to be seen have all contributed to a perhaps irrevocable loss of personal privacy. She does this circuitously, eschewing the alarmist and Luddite tropes that encumber many studies of our technology-dependent culture. Instead, Busch meanders across a broad cultural landscape to locate the source of our beliefs, fears, and desires about invisibility.... [She] explores camouflage, anonymity and unsigned works of art, and police surveillance of minorities. By drawing from natural science, children’s literature, folklore, art history, and more, Busch takes the timely issue of privacy and makes it timeless.”—The Paris Review

“An impressive look at myriad, diverse examples of invisibility.”—Library Journal

“As the world grows ever more connected, it's imperative that voices preaching caution without hyperbole come to the fore. How refreshing, then, to read Akiko Busch's How to Disappear, which perfectly threads the needle…[The book] isn't interested in providing a roadmap for getting off the grid, but in exploring the various ways humans do disappear, whether it's from view or simply into themselves…Philosophical and thoughtful, How to Disappear beautifully illuminates the ways we choose to hide.” —Shelf Awareness for Readers, starred review

“In this provocative series of essays, Busch examines how social media and the surveillance economy have redefined the way we live….Throughout, she asks important questions about the consequences of hypervisibility.”—BBC Culture, Ten Books to Read this February

“These are by no means ‘notes’ but rather fully formed and often powerful explorations of the many realms and levels of invisibility to which one might aspire or withdraw…With a tone that is more evocative than provocative, Busch meaningfully celebrates value where it goes unseen by others.”—Kirkus

“Busch’s exploration of her subject is free-associative, wide-ranging, and poetic in its own right…Busch offers a path to quiet dignity that is rich and enlightening.”—Publishers Weekly

“What a mesmerizing, unexpected, and hopeful book this is. A wondrous magic hat of revelations on the power of the unseen – to disappear into, lose oneself in, and emerge transformed, with new hope for the possibility of a surer, quieter, more humane way of being.”—Jennifer Ackerman, author of The Genius of Birds

“What a stunning, intelligent book! And timely in these times of endless exposure. Akiko Busch leaves no pebble unturned in her contemplation of invisibility in all of its myriad guises, many of which will surprise you, and in the course of things her contemplation becomes a search for one’s place in nothing less than the flow of life itself.” —Mary Ruefle, author of My Private Property and Madness, Rack, and Honey

“Kafka dreamt of being a waiter. He wanted to be present but invisible. Akiko Busch has illuminated this essential part of being. Examining with a clear lyricism, what it means to protect yourself from too much visibility. Her work offers a much needed sense of balance in a time of turmoil.  A reminder that we can shift and change and that there is such a thing as privacy.”—Maira Kalman, author and illustrator of Beloved Dog and The Principles of Uncertainty

“What a perfect moment for this beautiful and affecting book. Aki Busch writes with grace, humor and breathtaking precision about the unsung virtues of blending in rather than standing out, of finding our most essential selves by losing our need to be perpetually seen. Weaving together science, myth and storytelling, anecdotes from Iceland to Grand Cayman Island, the Bay of Fundy to a virtual reality studio in Brooklyn, she reminds us that it is often in those all-consuming moments of losing ourselves—in love, in work, in the natural world—that we see and feel most acutely, that how to be depends on knowing both how to be fully present and how to disappear. This is a book that will be passed from friend to friend like a secret handshake--a must read.”—Andrea Barnet, author of Visionary Women

Akiko Busch is the author of several essay collections, including Nine Ways to Cross a River, a series of linked essays about swimming across American rivers and The Incidental Steward, published by Yale University Press in 2013 and awarded an Honorable Mention in the Natural History Literature category of 2013 National Outdoor Book Awards. She was a contributing editor at Metropolis magazine for twenty years, and her work has appeared in numerous national magazines, newspapers, and exhibition catalogues. She is on the faculty of the School of Visual Arts in New York City.
or support indie stores by buying on