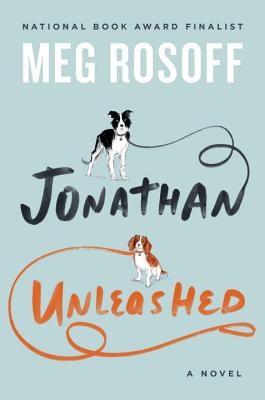 “[A] comic masterpiece.” —People magazine’s “Book of the Week”

“A charming comedy on love, friendship, and the surprising influence of man’s best friend.” —Harper’s Bazaar

Jonathan Trefoil’s boss is unhinged, his relationship baffling, and his apartment just the wrong side of legal. His girlfriend wants to marry someone just like him—only richer and with a different sense of humor. He doesn’t remember life being this confusing, back before everyone expected him to act like a grown-up.

When his brother asks him to look after his dogs, Jonathan's world view begins to shift. Could a border collie and a cocker spaniel hold the key to life, the universe, and everything? Their sly maneuvering on daily walks and visits to the alluring vet suggest that human emotional intelligence may not be top dog after all.

A funny, wise romantic comedy set in Manhattan, Jonathan Unleashed is a story of tangled relationships, friendships, and dogs. Rosoff’s novel is for anyone wondering what to be when they grow up, and how on earth to get there.

Praise For Jonathan Unleashed: A Novel…

“[A] comic masterpiece.”
—People magazine’s “Book of the Week”

“Charming. . . . A delightful literary romp. . . . There is a lyrical cadence to Rosoff’s prose. You almost hear it while reading, as though the tale is being told to us. There is nothing extraneous about this book, from the choice of words to the supporting characters; each and every one feels needed.”
—USA Today

“This is not one of those cute talking dog books; these dogs are subtle. . . . [Rosoff] explores the compromises and decisions we make trying to fit into our lives with wisdom, a light touch, and a lot of humor. And dogs!”
—Minneapolis Star Tribune

“A charming comedy on love, friendship, and the surprising influence of man’s best friend.”
—Harper’s Bazaar

“Rosoff captures both the existential and the mundane, the ridiculous and absurd of the young urbanite making his way in New York City. Her writing is quick and entertaining, creating scene after vivid scene. . . . Rosoff’s tale feels reminiscent of movies like 500 Days of Summer.”
—BookPage

“The story of New Yorker Jonathan Trefoil and his search for the meaning of life, specifically his own. Everything’s a mess until he’s asked to look after his brother’s dogs — a border collie and cocker spaniel. Lucky for Jonathan, man’s best friends work wonders for him.”
—The Fort Worth Star-Telegram

“[A] delightful read. . . . This is the story of a New Yorker who feels stuck and helpless, and the two dogs that inspire him to lead a different life.”
—Bustle

“Rosoff, best known for her award-winning youth books, makes another foray into the adult world here with this sprightly romcom. In reality, though, the age line in her books has never run true. And why should it? Her writings—thoughtful, mutable, and often with love, of one kind or another, as an undercurrent—address the human condition with a knowingness that transcends artificial numerical landmarks. This one offers a treat that at first bite seems light, but there’s definitely a lot to chew on.”
—Booklist (starred review)

“Rosoff has a great handle on the nuances of contemporary dog culture. She writes big, funny scenes that heighten the over-active imagination of her very likable hero as he 'goes to the dogs’ in all areas of his life, hilariously liberated from the stifling confines of his existence.”
—Shelf Awareness for Readers

“Bestselling novelist Rosoff  unleashes a lighthearted tale that explores the angst of new adulthood, digging up delightful insights about life, love, and the unconditional friendship (and genius) of dogs. No bones about it, readers of this charmer are in for a real treat.”
—Kirkus Reviews

“Some protagonists come of age, and others go out the back exit and avoid that age entirely. Thank goodness Jonathan Trefoil is in the latter camp. Reluctant optimists will adore his charming missteps and spit-out-your-drink-funny forays into adult life.”
—Courtney Maum, author of I Am Having So Much Fun Here Without You

Praise from the UK for Jonathan Unleashed

“A humorous tale of a young New Yorker’s search for happiness, and the two dogs who help him find it. Meg Rosoff’s first adult novel hits all the right notes for those failing at being a grown-up.”
—Marie Claire (London)

“A screwball treat. . . . [Jonathan] is a terrific romantic comic hero, the sort of endearingly flawed human character the late, great Nora Ephron might have created. Like Ephron, Rosoff, has a lightness of touch, and is also a clever comic writer: her dialogue is sharp, her characters keenly observed and ruthlessly well realized.”
—The Sunday Times (London)

“Jonathan Unleashed is funny, smart writing from a novelist with such an assured voice that you can’t resist accompanying her on the novel’s journey.”
—The Sunday Express

“Hugely entertaining. . . . Fiercely funny. . . . I can’t think of many recent novels that show the same almost Joseph Heller-like ability to express abiding pessimism with such irresistible comic zest—or that provide such a jolting reminder of the irreducible weirdness of a blameless adult life.”
—James Walton, The Daily Telegraph

“A wise and witty hit. . . . With whip-smart dialogue that nods to David Nicholls and Richard Curtis, Rosoff explores how twentysomethings find their feet in the big city, face up to the horror of entry-level employment and figure out who they really love. . . . A loveable novel that has the power to make readers of all ages laugh.”
—The Times (London)

Meg Rosoff grew up in Boston and worked in advertising for fifteen years before writing her first novel, How I Live Now, which has sold more than one million copies in thirty-six territories. It won the Guardian Children’s Fiction Prize, the Printz Award, was short-listed for the Orange Prize and made into a film. Her subsequent five novels have been awarded or short-listed for, among others, the Carnegie Medal and the National Book Award. The laureate of the 2016 Astrid Lindgren Memorial Award, she lives in London with her husband, daughter, and two dogs.
or
Not Currently Available for Direct Purchase