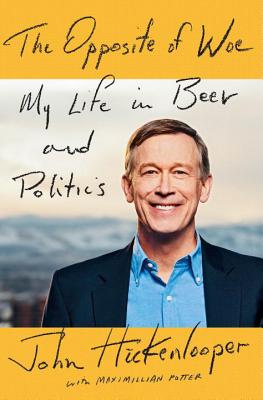 The Opposite of Woe

My Life in Beer and Politics

The maverick (and very funny) governor of Colorado tells his story, from early loss to college on the ten-year plan, to remarkable business and political success

In just over a decade, John Hickenlooper has gone from brew pub entrepreneur to governor of Colorado, hailed by political analysts and media alike as a solid contender to be the next vice president. In The Opposite of Woe, Hickenlooper tells his own story of unlikely success in his singularly sharp and often hilarious voice.

After ten years at Wesleyan, Hickenlooper found himself laid off from his first job as a geologist. So he rented a space in an empty warehouse in an empty pocket of Denver’s downtown to open a brew pub. Honest, likable, practical, Hickenlooper turned out to be a natural at the job; the pub was a huge success. In fifteen years, he blossomed from small business owner into millionaire at the helm of a string of pubs across the western United States. He was so influential in the community that, encouraged by many, he ran for mayor, essentially as a lark. And then he won.

So began his eight years as one of the most creative and successful mayors in the United States. Doubling down in politics, Hickenlooper ran for Colorado governor in 2010, and won again—twice. Tackling a host of volatile issues, from prison reform to fracking, capital punishment to same-sex marriage and legalized marijuana, Hickenlooper’s administration has persuaded opposing constituencies of a true battleground state to agree and move forward on a middle path­—all while dealing with tragic wildfires, floods, and the assassination of a cabinet member.

On display throughout the book is the rare candidness that has made Hickenlooper not only wildly popular but also remarkably successful. Cowritten with journalist and former speechwriter Maximillian Potter, The Opposite of Woe is a fresh­ and refreshing­ angle on our political landscape from one of its brightest rising stars.

Praise For The Opposite of Woe: My Life in Beer and Politics…

“Colorado's high-profile governor submits an unconventional autobiography . . . . All this entertains wonderfully: the brushes with the famous . . . the colorful anecdotes about the campaign to save ‘Mile High,’ the beer label authored by Kurt Vonnegut, the Quaker ancestor who was also a brewer… It’s difficult to imagine a more unusual preparation for public life than the one ably recounted here.” —Kirkus Reviews

John Hickenlooper became governor of Colorado 2011. The first brewer to become a governor in the history of the nation since Sam Adams in 1792, Hickenlooper previously served as mayor of Denver.

Maximillian Potter is a writer and editor whose work has appeared in Outside, GQ, and Vanity Fair. He was the Senior Media Adviser and Speechwriter for Governor Hickenlooper.
Loading...
or
Not Currently Available for Direct Purchase