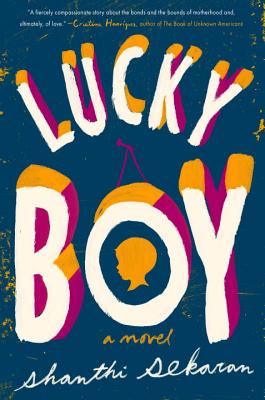 “Soli is an 18-year-old Mexican girl who enters the U.S. illegally and gives birth to a baby boy. Rashi and Kavya Reddy are an Indian-American couple in Berkeley who have unsuccessfully tried to have children. Their stories intersect when Soli is arrested and her baby is taken from her by Child Protective Services and given into foster care with the Reddys, who become attached to baby Ignacio and want to adopt him. Sekaran does a good job describing the trials and tribulations of illegal immigrants, and Soli's hope of regaining custody rings true. A compelling read that examines very topical parental rights and immigration issues.”
— Valerie Koehler (M), Blue Willow Bookshop, Houston, TX
View the List

A gripping tale of adventure and searing reality, Lucky Boy gives voice to two mothers bound together by their love for one lucky boy.

Eighteen years old and fizzing with optimism, Solimar Castro-Valdez embarks on a perilous journey across the Mexican border. Weeks later, she arrives in Berkeley, California, dazed by first love found then lost, and pregnant. This was not the plan. Undocumented and unmoored, Soli discovers that her son, Ignacio, can become her touchstone, and motherhood her identity in a world where she’s otherwise invisible.

Kavya Reddy has created a beautiful life in Berkeley, but then she can’t get pregnant and that beautiful life seems suddenly empty. When Soli is placed in immigrant detention and Ignacio comes under Kavya’s care, Kavya finally gets to be the singing, story-telling kind of mother she dreamed of being. But she builds her love on a fault line, her heart wrapped around someone else’s child.

“Nacho” to Soli, and “Iggy” to Kavya, the boy is steeped in love, but his destiny and that of his two mothers teeters between two worlds as Soli fights to get back to him. Lucky Boy is a moving and revelatory ode to the ever-changing borders of love.

“Pulses with vitality, pumped with the life breath of human sin and love.”—USA Today

“Topical and timely...Sekaran’s book invites the reader to engage empathetically with thorny geopolitical issues that feel organic and fully inhabited by her finely rendered characters.”—Chicago Tribune

“With wit, empathy and a page-turning plot, the novel stirs ethical questions...that the author rightly refuses to answer. Sekaran has written a tender, artful story of the bravery of loving in the face of certain grief.”—San Francisco Chronicle

“Like M.L. Stedman in The Light Between Oceans, Sekaran presents a complex moral dilemma that leaves readers incapable of choosing sides...A must read.”—BookPage

“Deeply compassionate...Delivers penetrating insights into the intangibles of motherhood and indeed, all humanity.”—Booklist (starred review)

“Both timely and timeless, depicting the comedy and delights of the world as well as its brutalities and injustices.”—Edan Lepucki,  author of California

“Heartbreaking and timely...Explores motherhood and lengths we will go to in order to achieve our dreams.”—Real Simple

“Sekaran is a master of drawing detailed, richly layered characters and relationships; here are the subtly nuanced lines of love and expectation between parents and children; here, too are moments of great depth and insight.”—Kirkus Reviews (starred review)

“A heartfelt and moving novel that challenges our notions of motherhood and the true meaning of home.”—Molly Antopol, author of The UnAmericans

“[H]umanizes current discussions of immigration, privilege, and what it means to be an American...Would be a strong choice for book clubs.”—Library Journal (starred review)

“There are few easy solutions to life’s toughest problems, but Lucky Boy goes a long way toward putting a humanizing face on them.”—ShelfAwareness

“A gripping, obsessive, character-driven narrative of sacrifice and identity—where the lives of two women become forever tangled in the roots of motherhood.”—Simon Van Booy, author of The Illusion of Separateness

Shanthi Sekaran teaches creative writing at California College of the Arts, and is a member of the San Francisco Writers’ Grotto. She is the author of The Prayer Room and her work has appeared in the New York Times, Best New American Voices, and Canteen, as well as online at Zyzzyva and Mutha Magazine. A California native, she lives in Berkeley with her husband and two children. Lucky Boy is her second novel.