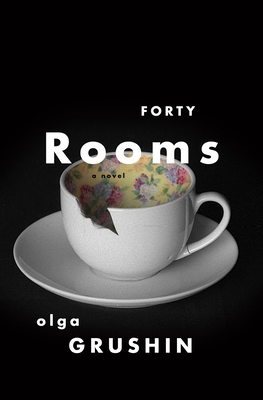 The internationally acclaimed author of The Dream Life of Sukhanov now returns to gift us with Forty Rooms, which outshines even that prizewinning novel.

Totally original in conception and magnificently executed, Forty Rooms is mysterious, withholding, and ultimately emotionally devastating. Olga Grushin is dealing with issues of women’s identity, of women’s choices, that no modern novel has explored so deeply.

“Forty rooms” is a conceit: it proposes that a modern woman will inhabit forty rooms in her lifetime. They form her biography, from childhood to death. For our protagonist, the much-loved child of a late marriage, the first rooms she is aware of as she nears the age of five are those that make up her family’s Moscow apartment. We follow this child as she reaches adolescence, leaves home to study in America, and slowly discovers sexual happiness and love. But her hunger for adventure and her longing to be a great poet conspire to kill the affair. She seems to have made her choice. But one day she runs into a college classmate. He is sure of his path through life, and he is protective of her. (He is also a great cook.) They drift into an affair and marriage. What follows are the decades of births and deaths, the celebrations, material accumulations, and home comforts—until one day, her children grown and gone, her husband absent, she finds herself alone except for the ghosts of her youth, who have come back to haunt and even taunt her.

Compelling and complex, Forty Rooms is also profoundly affecting, its ending shattering but true. We know that Mrs. Caldwell (for that is the only name by which we know her) has died. Was it a life well lived? Quite likely. Was it a life complete? Does such a life ever really exist? Life is, after all, full of trade-offs and choices. Who is to say her path was not well taken? It is this ambiguity that is at the heart of this provocative novel.

Olga Grushin is a Russian-born award-winning writer whose work has been translated into fifteen languages. Her first novel, The Dream Life of Sukhanov, won the New York Public Library Young Lions Fiction Award and was a finalist for the Los Angeles Times Award for First Fiction and for England’s Orange Award for New Writers. The New York Times chose it as a Notable Book of the Year, and both it and her second novel, The Line, were among The Washington Post’s Ten Best Books of the Year (2007, 2010). In 2007, Granta named Grushin one of the Best Young American Novelists. Forty Rooms is her third novel. Grushin was born in Moscow, moved to the United States as a teenager, and now lives outside Washington, D.C., with her two children.

“[An] ingenious and original conceit...Forty Rooms is a deft, engaging novel written with rare eloquence. But a ferociously uncompromising morality play lurks within it.” — Wall Street Journal

“The structure of Olga Grushin's FORTY ROOMS is ingeniously simple...there is enough material to warrant hours of contemplation...The reader's impulse to grapple with the text, to wrestle it down and to raise objections or to attempt to identify her own place in the context of the story, is a sign not of weakness, but of Grushin's genius. There is no redemption story to relax into here, and no easy answers...This novel reminds us that to pursue her dreams, a woman is working against the establishment, not with it. To the young women into whose hands I will most certainly be putting Grushin's novel, I will say this: You can do it all, but together we can create a world in which we might be able to do more. Because if we don't keep working for greater gender equality, it's not in the best interests of the current power brokers to stop us from continuing to spend more than a fair share of our lives elbow-deep in soapsuds whether we choose to or not.” -- Alexandra Fuller, New York Times Book Review

“Grushin is too sly to be bound by cliché. If Mrs. Caldwell fails to be true to herself—and that "if" is sincere—this is because there are real questions about who that true self is. These are questions that women, especially, will recognize. Honest, tender, and exquisitely crafted. A novel to savor.” — Kirkus, starred review

"[A]n enchanted meditation on poetry and life... Grushin best captures the nagging regrets of her tortured artist in a magically lyrical pair of conversations with her bitter and bowed husband." — Publishers Weekly

“This book is captivating in both concept and execution. It's a collection of 40 short stories that follow a woman through her life, one story for each room she inhabits, from her childhood home to her college apartment to her first house and beyond. We're with her when, as a young girl, she talks with a mermaid in her mother's bedroom, and when, as a grown woman, her marriage begins to crumble. Filled with beautiful and surreal moments that perfectly capture the magic that can exist in real life, this book has extraordinary depth of imagination and emotion.” —  Bustle

“A young female poet, shedding Soviet Moscow for an American education, wants only “to live in a timeless poem.” But time catches up to her with brutal stealth, and before too long she’s “Mrs. Caldwell,” a wealthy suburban housewife without a stanza to show for it. Grushin, the Russian-American author of the extraordinary Dream Life of Sukhanov, spins a Bovary plot into a mystical tapestry, complete with ghostly harbingers, jarring shifts in perspective, and linguistic fillips most native-born writers would envy. She also crafts a feminist response to Joyce’s Stephen Dedalus — an artist navigating life backwards in heels.” —Boris Kachka, Vulture

“Grushin is after something beyond the conflict between artistic expression and the aspirations of well-to-do suburbanites, or even the question of whether Mrs. Caldwell has sold out. The genius of Forty Rooms is instead its suggestion that a betrayal of childhood dreams can still allow for a life filled with meaning, one that is contradictory, replete with loss, contentment, regret and its own definition of purpose. Forty Rooms is a beautiful, moving novel of dreams that reflects life as it is lived.” —Jeanette Zwart, Shelf Awareness

“Sly and devastating…Full of original and quoted poems, this heartbreaking novel is an invitation to contemplate whether the richness and ambition of one’s life has to correspond to the proportions of one’s landscape.”  — O Magazine

“Grushin beautifully renders a riddle of our time” — Chicago Tribune

"Lyrical and poignant, this is an ideal read for artists who seek answers to life's biggest questions." — Bookish

“Forty Rooms is a sensitive and exquisitely told meditation on the pleasures of art.” — BookPage

“But this novel isn’t after perfection, either of life or work. Rather, it shows how life is built out of adjustment — dreams tempered and poetry transformed into prose.” — Boston Globe

Praise for The Dream Life of Sukhanov

“Make no mistake about it: The Dream Life of Sukhanov is the work of a true artist . . . in its expansiveness, its refusal to dwell on the tiny palace of self, it harks back to the great Russian masters. In so doing, it breathes new life into American literary fiction.” —Jonathan Yardley, The Washington Post Book World

“To write a novel as good as this, you have to be very talented. And Grushin is.”—Financial Times

“Grushin raises the bar for first novels. Like all excellent works, it does one unusual enough thing: It fills one with joy, because it works at every level.” —The Irish Times

“[A] stunning fictional debut, and a book which reminds us of what a superb contribution the Russian tradition has made, and can still make, to the literary art, compared with our own fallen and humdrum literary world.” —The Independent (UK)

“Grushin’s haunting dreamscape of her native land is a debut to be cheered here, there and everywhere.”—Dan Cryer, The Atlanta Journal-Constitution

Praise for The Line

“If you missed Grushin’s first book, [this] is your chance to catch a rising star as she establishes herself in the top ranks of American authors.”—Garrett Kenyon, LitKicks.com

“I’m not sure which is the bigger accomplishment, Grushin’s ability to depict the tumult, disappointment and daily grind of life in post-revolution Russia, or the light touch of her style. The  city her characters inhabit may be oppressive, but The Line is not.”—Jessa Crispin, “What We’re Reading,” NPR.org