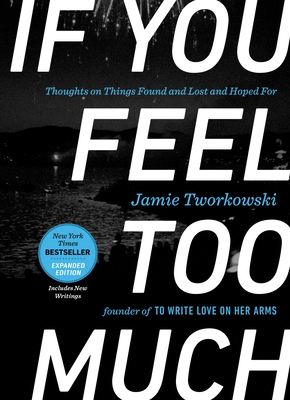 If You Feel Too Much, Expanded Edition

Thoughts on Things Found and Lost and Hoped For

Now in an expanded hardcover edition with new stories—the New York Times bestseller from the founder of To Write Love on Her Arms!

In 2006 Jamie Tworkowski wrote a story called “To Write Love on Her Arms,” about helping a friend through her struggle with drug addiction, depression, and self-injury. The piece was so hauntingly beautiful that it quickly went viral, giving birth to a non-profit organization of the same name. Now, To Write Love on Her Arms (TWLOHA) is an internationally recognized leader in suicide prevention and a source of hope, encouragement, and support for people worldwide.

If You Feel Too Much is a celebration of hope, wonder, and what it means to be human. From personal stories of struggling on days most people celebrate to words of strength and encouragement in moments of loss, the essays in this book invite readers to believe that it’s okay to admit to pain and okay to ask for help. If You Feel Too Much is an important book from one of this generation’s most important voices.

Praise For If You Feel Too Much, Expanded Edition: Thoughts on Things Found and Lost and Hoped For…

"I’ve heard countless stories from people who were hurting, lonely, confused, and even suicidal—they were able to find a toehold in Jamie's words. They love him because he accepted them as they were, told them they didn’t have to act, and let them know their story contributed to the beauty."
—from the foreword by Donald Miller, New York Times bestselling author of Blue Like Jazz

"It's rare that I'm truly inspired by what life brings to my front door. Meeting Jamie was one of these rare moments. He has the biggest heart and when he says the words 'You matter,' you believe him."
—Alex Morgan, U.S. Women's National Soccer Team

“Jamie loves people unlike anyone I’ve ever met. He is also a humble guy and a faithful friend. He’s the one who has offered to come on my darkest day, to cry with me, and on my best day to celebrate. His brand of love is one without judgment, boundaries or pretense. This book gives you a wonderful glimpse at Jamie’s beautiful heart. You’re in for a treat.”
—Bob Goff, New York Times-bestselling author of Love Does

“Jamie is special. He is sincere and sensitive and kind. He has poured his heart into this book, and that's how he lives his life. I hope the honesty in Jamie's story and experiences will help you to be honest in yours.”
—Kyle Korver, NBA All-Star

"Through poignant self-reflection and stories that pulse with a poetic rawness, Jamie invites us to be part of a bigger conversation. It's one that leads to community, connection, healing and incredible hope."
—Dr. Georgina Smith, clinical psychologist

"With this book, you have Jamie's heart in your hands. By honestly sharing his life, in joy and pain, he is teaching others how to do the same. If You Feel Too Much is Jamie's guide to loving better and finding joy in being known."
—Jason Russell, co-founder of Invisible Children

"It's impossible not to feel it deep in your guts when Jamie writes or speaks. His vivid honesty about the human condition always leaves me simultaneously inspired and feeling less alone. This book can only be summed up by using Jamie's own words—it truly is ‘a living, breathing, screaming invitation to believe better things.’"
—Keltie Knight, TV personality

“There are people that say they care for others. And then there are those that do care. Then there is Jamie, who breathes love. This book is proof.”
—Propaganda, hip-hop artist and spoken word poet

"When I first met Jamie, he struck me as someone on a mission. Through his sheer determination, he brought some difficult issues out of the shadows and helped so many people realize they were not alone. I believe this book will inspire others to do the same, to get help, and to chase their passion just as he has."
—Kevin Lyman, founder and producer of the Vans Warped Tour

"We hired Jamie when he was 22 years old to be our Florida Sales Rep. That decision surprised a lot of people. When he left the company at 26 to start TWLOHA, people were equally surprised. It’s rare in life when one knows without a shadow of doubt what they are meant to be doing on this planet. It’s been incredible to watch Jamie's journey unfold.”
—Bob Hurley, Founder/Chairman of Hurley

Jamie Tworkowski is the founder of To Write Love on Her Arms, a non-profit movement dedicated to presenting hope and finding help for people struggling with depression, addiction, self-injury, and suicide. He spends much of his time on the road, telling the TWLOHA story and encouraging audiences at universities, concerts, and music festivals. Jamie has been interviewed by NBC Nightly News, CBS Sunday Morning, and Rolling Stone magazine. A proud uncle, he lives in Melbourne Beach, Florida.
Loading...
or support indie stores by buying on