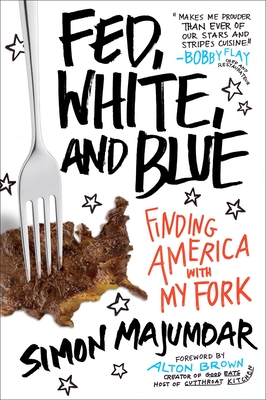 Finding America with My Fork

Food writer and Food Network personality Simon Majumdar sets out across the United States to discover what it means to be American, one bite at a time.

Before deciding whether to trade in his green card for a U.S. citizenship, Simon Majumdar knew he needed to find out what it really means to be an American. So he set out on a journey to discover America through the thing he knows best: food. Over the course of a year, Simon crisscrossed the United States, stopping in locales such as Plymouth, Massachusetts, to learn about what the pilgrims ate; Kansas, for a Shabbat dinner; Wisconsin, to make cheese; Alaska, to fish for salmon alongside a grizzly bear; and Los Angeles, to cook at a Filipino restaurant in the hopes of making his in-laws proud. Along the way he makes some friends and digs in to the food cultures that make up America—brewing beer, farming, working at a food bank, and even tailgating. Full of heart, humor, history, and, of course, food, Fed, White, and Blue is a warm, funny, and inspiring portrait of becoming an American in the twenty-first century.

Praise For Fed, White, and Blue: Finding America with My Fork…

Praise for Fed, White, and Blue

"Food Network personality Majumdar (Nicely Spiced) sets out to explore the diversity of American culinary cultures in advance of becoming a U.S. citizen. Starting locally, he insinuates himself into a Los Angeles Filipino restaurant, then branches out in unexpected directions: barbecuing in Nebraska, clam digging on the Jersey shore, surveying Central American foods in the Bronx. His appetite is sometimes terrifyingly prodigious, but the food often sounds delicious. The writing is witty and tart, though Majumdar is ever a gracious and appreciative guest. It's not all feasts-a trip to Texarkana is spent working with those combatting hunger in that community and reflecting on how so many can go unfed in this country. His journey leaves the author sure of his decision to make his home in America and the reader with a rich series of snapshots spotlighting parts of the country and their foods that deserve greater attention. VERDICT: Part travelog, part culinary adventure, this breezy tome will satisfy many. Recommended where books on American cuisine and travel are popular." —Library Journal

“I have crisscrossed this country a dozen times by car, by motorcycle, by train and light aircraft. I've eaten a thousand meals from the glaciers of Alaska to the bars of Key West.  And if Simon Majumdar asked me to join him on a journey across that same edible landscape tomorrow, I'd go without hesitation, because, every mile (and meal) would be new again.”—Alton Brown, host of Iron Chef and Cutthroat Kitchen

“Simon Majumdar’s opinions often drive me nuts, but I usually let him get away with it. In part, it’s because he really knows about food, but even more so, it’s because he is so entertaining. I loved what he had to say about the rest of the world and I can’t wait to hear what he has to say about America.”—Michael Symon, Iron Chef and co-host of The Chew

“The Indiana Jones for the foodie set.”—Andrew Friedman, co-editor of Don't Try This at Home

Simon Majumdar is a food writer and broadcaster, and author of Eat My Globe and Eating for Britain. He has recurring roles as a judge on Iron Chef, The Next Iron Chef, and Cutthroat Kitchen, and has appeared on Beat Bobby Flay, The Best Thing I Ever Ate, Extreme Chef, and other shows. He is the fine-living correspondent for AskMen.com and writes regular features for the Food Network website, in addition to other media outlets. Simon was one of the voices behind the Dos Hermanos blog, which GQ called “Michelin-starred food blogging.” He lives in Los Angeles.
Loading...
or
Not Currently Available for Direct Purchase