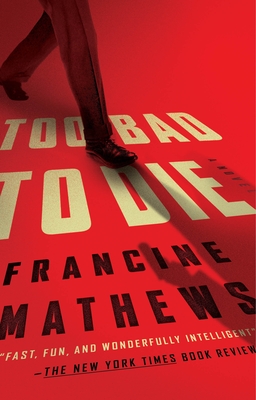 Too Bad to Die

A tense and enthralling historical thriller in which British Naval Intelligence officer Ian Fleming attempts to foil a Nazi plot to assassinate FDR, Churchill, and Stalin.

November, 1943. Weary of his deskbound status in the Royal Navy, intelligence officer Ian Fleming spends his spare time spinning stories in his head that are much more exciting than his own life…until the critical Tehran Conference, when Winston Churchill, Franklin Roosevelt, and Josef Stalin meet to finalize the D-Day invasion.

With the Big Three in one place, Fleming is tipped off that Hitler’s top assassin has infiltrated the conference. Seizing his chance to play a part in a real-life action story, Fleming goes undercover to stop the Nazi killer. Between martinis with beautiful women, he survives brutal attacks and meets a seductive Soviet spy who may know more than Fleming realizes. As he works to uncover the truth and unmask the assassin, Fleming is forced to accept that betrayal sometimes comes from the most unexpected quarters—and that one’s literary creations may prove eerily close to one’s own life.

Brilliantly inventive, utterly gripping and suspenseful, Too Bad to Die is Francine Mathews’s best novel yet, and confirms her place as a master of historical fiction.

Praise For Too Bad to Die: A Novel…

"Fast, fun and wonderfully intelligent... this novel [is] wholly worthy of its ingenious subject."
—The New York Times Book Review

“The writing is urbane with a touch of humor, and the plot is absolutely brilliant… The portrayal of the master mystery writer and his alter-ego is superb. If Ian Fleming hadn't invented James Bond, Francine Mathews would have.”
—Denver Post

"Writing with elegance and grit, Mathews keeps the reader in a state of suspense… Fleming’s brains and intrepidity, his inner conflicts as well as his suave recklessness, make him a character as intriguing as one in his own books.”
—Historical Novels Review

“Absolutely marvelous! This novel masterfully weaves fact and fiction into a high-pitched thriller that keeps us spellbound from the very first pages. Great plotting, exotic locales  and  historical characters who positively come alive on the page, with some delightful sly winks along the way.”
—Jeffery Deaver

“In this complex, remarkable and suspenseful novel, Francine Mathews combines the genius of Ian Fleming with the drama of World War II and concocts a stunning tale of intrigue and deceit.”
—Jed Rubenfeld

“A rousing adventure—not a pastiche of a Bond novel with Fleming substituted for 007, but rather a well-plotted military thriller with a story that feels like it could have happened. Mathews’ portrayal of Fleming feels dead-on accurate, and she has some fun showing us the (supposed) real-world origins of some of Bond’s fictional attributes. Another excellent blending of fact and fiction from the author of Jack 1939.”
—Booklist

“[Ian] Fleming is a complex character with an active imagination and a store of hidden courage. Replete with recognizable characters from history, this look at a crucial period of World War II will satisfy history buffs and mystery lovers alike.”
—Library Journal

“The pace is so propulsive that you’ll read every word…Mathews’s ability to weave fact into her tale is nothing short of remarkable…there are precious few entertainments this captivating.”
—The Washington Post

“One of the most deliciously high-concept thrillers imaginable.”
—The New Yorker

“A brisk thriller that defies the odds…It’s no small feat to take a historic figure who looms as large in real life as John F. Kennedy, place him in an improbable fantasy, and not strain credulity. But in this case, Mathews has accomplished her mission.”
—USA Today

Francine Mathews is the author of Too Bad to Die, Jack 1939 and more than twenty other novels of mystery, history, and suspense. A graduate of Princeton and Stanford, she spent four years as an intelligence analyst at the CIA and presently lives and works in Colorado.
Loading...
or
Not Currently Available for Direct Purchase