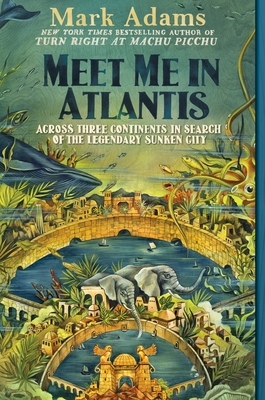 Meet Me in Atlantis (Paperback)

Across Three Continents in Search of the Legendary Sunken City

The author of Turn Right at Machu Picchu travels the globe in search of the world’s most famous lost city.

“Adventurous, inquisitive and mirthful, Mark Adams gamely sifts through the eons of rumor, science, and lore to find a place that, in the end, seems startlingly real indeed.”—Hampton Sides

A few years ago, Mark Adams made a strange discovery: Far from alien conspiracy theories and other pop culture myths, everything we know about the legendary lost city of Atlantis comes from the work of one man, the Greek philosopher Plato. Stranger still: Adams learned there is an entire global sub-culture of amateur explorers who are still actively and obsessively searching for this sunken city, based entirely on Plato’s detailed clues.  What Adams didn’t realize was that Atlantis is kind of like a virus—and he’d been exposed.

In Meet Me in Atlantis, Adams racks up frequent-flier miles tracking down these Atlantis obsessives, trying to determine why they believe it's possible to find the world's most famous lost city—and whether any of their theories could prove or disprove its existence. The result is a classic quest that takes readers to fascinating locations to meet irresistible characters; and a deep, often humorous look at the human longing to rediscover a lost world.

Mark Adams is the author of the acclaimed history Mr. America, which The Washington Post named a Best Book of 2009, and the New York Times bestsellers Meet Me in Atlantis and Turn Right at Machu Picchu. A writer for many national magazines, including GQ, Men's Journal, and New York, he lives near New York City with his wife and children.

Praise For Meet Me in Atlantis: Across Three Continents in Search of the Legendary Sunken City…

“The lively, skeptical but open-minded travel writer Mark Adams...takes readers along to four plausible sites, without quackery and with a contagious spirit of curiosity, interviewing scores of experts and fanatics, and painting pictures that will make even the most levelheaded traveler yearn to repeat his fantastic itinerary.”—The New York Times Book Review

“Infused with humor and pop culture references, Adams makes what could have been a tedious recitation of theories into an exciting adventure.”—Chicago Tribune

"Always entertaining, Meet Me in Atlantis also introduces a significant amount of Platonic philosophy and devotes generous space to legitimate archaeology like that in Akrotiri. Perhaps the most enjoyable aspect is Adams’s knack for clever descriptions of places and people.”—The Daily Beast

“Few mythic places exert a more powerful pull on the imagination than Atlantis, and here the fabled lost city has found its perfect chronicler. Adventurous, inquisitive and mirthful, Mark Adams gamely sifts through the eons of rumor, science, and lore to find a place that, in the end, seems startlingly real indeed—like a vivid dream surfacing from the weird and murky depths of human consciousness.”—New York Times bestselling author Hampton Sides

“The collision between Adams' youthful zeal and journalistic sensibilities provide an arresting dichotomy to an absorbing search… Fact or fiction, Atlantis, as the author ably demonstrates, still has the power to enthrall inquiring minds.”—Kirkus Reviews
or support indie stores by buying on
Copyright © 2020 American Booksellers Association