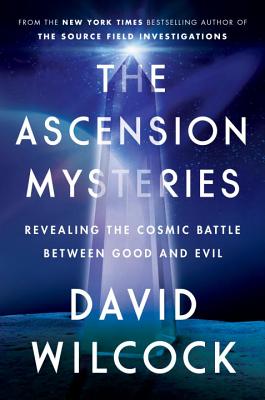 Revealing the Cosmic Battle Between Good and Evil

New York Times bestselling author David Wilcock has become one of the leading writers exploring ancient mysteries and new science. With his latest book, The Ascension Mysteries, David will take readers on a surprising and enthralling journey through the history of the universe, exploring the great cosmic battle surrounding our own ascension.

David Wilcock’s previous New York Times bestsellers, The Source Field Investigations and The Synchronicity Key, used cutting-edge alternative science to reveal oft-hidden truths about our universe. In The Ascension Mysteries, David takes us on a gripping personal journey that describes the secret cosmic battle between positive and negative happening every day, hidden in both the traumas of our own lives and the world’s headlines.

Through his contact with a positive higher intelligence behind the UFO phenomenon, groundbreaking scientific information, and data from high-ranking government whistle-blowers, David reveals that the earth is now on the front lines of a battle that has been raging between positive and negative extraterrestrials for hundreds of thousands of years. The Ascension Mysteries explores the towering personal obstacles David overcame to unlock the great secrets of our universe and looks ahead to what this battle means for each of us personally. By unifying ancient texts from a variety of religions with scientific data and insider testimony, David presents a stunning conclusion—that Earth is on the verge of a massive cosmic event that will transform matter, energy, consciousness, and biological life as we now know it and will utterly defeat the great villains of our time.

Praise For The Ascension Mysteries: Revealing the Cosmic Battle Between Good and Evil…

Praise for The Ascension Mysteries

“Alien enthusiasts who love corroborating proofs will find the large amount of new detail satisfying, and those who find Wilcock personally compelling will love the juicy details of his youth.”—Publishers Weekly

David Wilcock is a professional lecturer, filmmaker, and researcher of ancient civilizations, consciousness science, and new paradigms of matter and energy. He is the New York Times bestselling author of The Source Field Investigations, The Synchronicity Key, and The Ascension Mysteries. His seminal thoughts and expertise on consciousness have reached hundreds of thousands of people through his extensive online presence at DivineCosmos.com. Wilcock lives in California.
Loading...
or
Not Currently Available for Direct Purchase