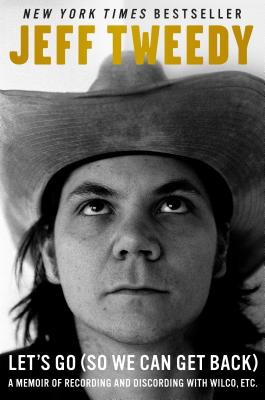 A Memoir of Recording and Discording with Wilco, Etc.

The singer, guitarist, and songwriter—best known for his work with Wilco—opens up about his past, his songs, the music, and the people who have inspired him in this personal memoir. This ideal addition to your Wilco collection also makes a perfect gift for music lovers.

Few bands have encouraged as much devotion as the Chicago rock band Wilco, and it's thanks, in large part, to the band's singer, songwriter, and guiding light: Jeff Tweedy. But while his songs and music have been endlessly discussed and analyzed, Jeff has rarely talked so directly about himself, his life, or his artistic process.

Until now. In his long-awaited memoir, Jeff will tell stories about his childhood in Belleville, Illinois; the St. Louis record store, rock clubs, and live-music circuit that sparked his songwriting and performing career; and the Chicago scene that brought it all together. He also talks in-depth about his collaborators in Uncle Tupelo, Wilco, and more; and writes lovingly about his parents; wife, Susie; and sons, Spencer and Sammy.

Honest, funny, and disarming, Tweedy's memoir will bring readers inside both his life and his musical process, illuminating his singular genius and sharing his story, voice, and perspective for the first time.

Praise For Let's Go (So We Can Get Back): A Memoir of Recording and Discording with Wilco, Etc.…

“Engaging . . . Sometimes the most revolutionary thing about music comes down to its ability to transform an individual.”
—The New York Times Book Review

“Wildly entertaining . . . Breathtaking . . . Unforgettable . . . Tweedy's music has never shied away from darkness, but he's also never been afraid to celebrate joy. The same is true with this remarkable memoir—it's a wonderful book, alternately sorrowful and triumphant, and it's a gift not just to his fans, but to anyone who cares about American rock music.”
—NPR.org

"The book’s unsparing detail—on everything from his upbringing in drab Belleville, Illinois, to the contentious band dynamics of Wilco and alt-country gods Uncle Tupelo—make this a uniquely raw rock autobiography.”
—Rolling Stone

“Illuminating . . . A compelling portrait of an artist whose everyman nature proves to be anything but a front.”
—AV Club

"[Tweedy] succeeds in entertaining and oddly revealing ways, moving with shape-shifting ease from wry self-effacement to what he calls Midwestern sarcasm to naked confession.”
—Chicago Tribune

“Laced with funny anecdotes . . . Readers might sometimes wonder at Tweedy’s lyrics, but in his playing, singing, and writing, whether in solo efforts, in collaboration with Wilco, or in his producing other artists, we know we have something to treasure.”
—Associated Press

“In its willingness to probe the most vulnerable periods in his past, though, [Let’s Go (So We Can Get Back)] is of a piece with Tweedy’s revered songwriting.”
—Vanity Fair

“His writing . . . could not be any more inviting and engaging, full of voice and rich, vivid storytelling. . . . He composes lengthy chapters that dive deep into explanations of his songwriting and recording process, the pain and joy of his upbringing, and his attempts to grapple with addiction, marriage, and parenthood.”
—Pittsburgh Post-Gazette

“Let’s Go (So We Can Get Back) reads more like a collection of humorously confessional essays by David Sedaris than a conventional rock memoir.”
—Uproxx

“Engaging and self-questioning.”
—The Philadelphia Inquirer

“The Wilco front man has just written one of the best and most revealing memoirs in years. . . . Let’s Go is a warts-and-all addiction memoir, but luckily it is much more than that, too. It’s also a genuinely moving ode to his wife and two sons (one of whom, Spencer, is the drummer in his side project, Tweedy), and an impassioned and often quite funny firsthand account of a music geek’s coming of age.”
—The Ringer

“Though Tweedy’s lyrics tend to be oblique, his new memoir is anything but.”
—Men’s Journal

“We already knew Jeff Tweedy could write. . . . We didn’t know Tweedy could write an entire book, and do it really well. But with the arrival of his new memoir, Let’s Go (So We Can Get Back) . . . it’s clear Tweedy is just as adept at writing nonfiction as he is songs. Let’s Go is a dry-witted examination of Tweedy’s personal life and career so enjoyable even the most casual of fans will be hooked.”
—Paste

“By turns self-deprecating, sincere, hilarious, and harrowing.”
—The Boston Globe

"A funny and candid addition to the rock-memoir genre.”
—Newsweek

“A memoir every bit as openhearted and captivating as [Tweedy’s] best songwriting. . . . Even the most difficult events in this page-turner are edged with humor and the hindsight of someone looking back from a better place. Though stories of contemporary musicians occupy a crowded field, this one’s a cut above the rest. Tweedy proves himself delightful company, and, as with his music, readers will hear this resonating long after they’ve finished.”
—Library Journal (starred review)

“Tweedy writes movingly about his parents, his wife and children, and his desire to find an artistic home for his band. Thoughtful, earnest reflections on family, creative integrity, and a life in music.”
—Kirkus Reviews

“Tweedy will delight fans by sharing such tidbits as his favorite moment in the Wilco documentary and how a Noah’s Ark analogy powered the Grammy-winning A Ghost Is Born album. Tweedy tells a wonderfully unassuming story of a music-filled life.”
—Publishers Weekly

As the founding member and leader of the American rock band Wilco, and before that the cofounder of the alt-country band Uncle Tupelo, Jeff Tweedy is one of contemporary American music's most accomplished songwriters, musicians, and performers. Since starting Wilco in 1994, Jeff has written original songs for ten Wilco albums and collaborated with folk singer Billy Bragg to bring musical life to three albums full of Woody Guthrie-penned lyrics in the Mermaid Avenue series. In 2014, he released Sukierae, a musical collaboration with his son, drummer Spencer Tweedy. He has produced a trio of albums for iconic soul and gospel singer Mavis Staples: the 2011 Grammy Award-winning You Are Not Alone, 2013's One True Vine, and the 2017 release, which he also cowrote with Staples, If All I Was Was Black. He lives in Chicago with his family.
Loading...
or
Not Currently Available for Direct Purchase