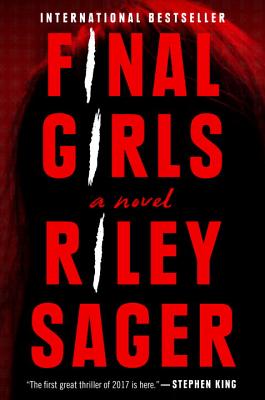 Ten years ago, college student Quincy Carpenter went on vacation with five friends and came back alone, the only survivor of a horror movie–scale massacre. In an instant, she became a member of a club no one wants to belong to—a group of similar survivors known in the press as the Final Girls: Lisa, who lost nine sorority sisters to a college dropout's knife; Sam, who went up against the Sack Man during her shift at the Nightlight Inn; and now Quincy, who ran bleeding through the woods to escape Pine Cottage and the man she refers to only as Him. The three girls are all attempting to put their nightmares behind them and, with that, one another. Despite the media's attempts, they never meet.

Now, Quincy is doing well—maybe even great, thanks to her Xanax prescription. She has a caring almost-fiancé, Jeff; a popular baking blog; a beautiful apartment; and a therapeutic presence in Coop, the police officer who saved her life all those years ago. Her memory won’t even allow her to recall the events of that night; the past is in the past.

That is until Lisa, the first Final Girl, is found dead in her bathtub, wrists slit; and Sam, the second Final Girl, appears on Quincy's doorstep. Blowing through Quincy's life like a whirlwind, Sam seems intent on making Quincy relive the past, with increasingly dire consequences, all of which makes Quincy question why Sam is really seeking her out. And when new details about Lisa's death come to light, Quincy's life becomes a race against time as she tries to unravel Sam's truths from her lies, evade the police and hungry reporters, and, most crucially, remember what really happened at Pine Cottage, before what was started ten years ago is finished.

“The tale builds to a fantastic conclusion that will have readers thinking of Gillian Flynn’s Gone Girl and Paula Hawkins’s The Girl on the Train. . . . This brilliant horror/psychological thriller will fly off the shelves.”—Library Journal (starred review)

“Sager quickly ratchets up the mystery and the psychological suspense in classic slasher-movie fashion . . . [and] takes time to delve into the head of the main character, creating an emotionally charged experience readers won’t soon forget.”—BookPage

“Final Girls is a compulsive read, with characters who are at once unreliable and sympathetic. Just when you think you've figured out the plot, the story pivots in a startling new direction. . . . A taut and original mystery that will keep you up late trying to figure out a final twist that you won't see coming.”—Carla Norton, bestselling author of The Edge of Normal and What Doesn't Kill Her

“An intriguing, original idea. We’ve all shuddered at bloodbath stories—but how does the survivor cope? It made me think outside the psychological box. Fresh voice, great characterization, and unexpected surprises. This stayed in my mind because it was different.”—Jane Corry, Sunday Times bestselling author of My Husband's Wife

Riley Sager is the pseudonym of an author who lives in Princeton, New Jersey. Riley is the New York Times bestselling author of the novels The Last Time I Lied and Final Girls, a national and international bestseller, which has been published in more than two-dozen countries.
Loading...
or
Not Currently Available for Direct Purchase