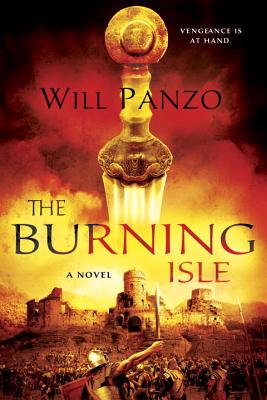 A powerful and gripping debut grimdark fantasy novel, set in a world of criminals, pirates, assassins, and magic...

“A man has only three reasons for being anywhere: to right a wrong, to earn a coin, or because he is lost.”

Cassius is not lost...

The mage Cassius has just arrived on the island of Scipio. Five miles of slum on the edge of fifty miles of jungle, Scipio is a lawless haven for criminals, pirates, and exiles. The city is split in two, each half ruled by a corrupt feudal lord. Both of them answer to a mysterious general who lives deep in the jungle with his army, but they still constantly battle for power. If a man knows how to turn their discord to his advantage, he might also turn a profit...

But trained on the Isle of Twelve, Cassius is no ordinary spellcaster, and his goal is not simply money. This is a treacherous island where the native gods are restless and anything can happen…

Praise For The Burning Isle…

“An engaging, fast-paced and sharply plotted novel. I loved seeing Cassius develop throughout the book and I can’t what to see what happens to him next. A great debut.”—James Islington, author of The Shadow of What Was Lost

“A solid, entertaining first book, soaked in grime and blood that details a tale steeped in magic, mysticism and dark intrigue…A wild read like a kinetic cinematic experience that will leave your heart thrumming for more.” —Smorgasbord Fantasia

“The Burning Isle is a finely crafted and well-paced debut.  It’s gritty and dark and won’t let you walk away until the very end.” —Fantasy Faction

“One of the better vengeance stories I have read in years.” —The Quill to Live

After working in publishing and as an editor for Marvel Comics, Will Panzo found his true calling as a physician assistant for an emergency department. The Burning Isle is his first novel. He lives and works in New York City.
Loading...
or
Not Currently Available for Direct Purchase