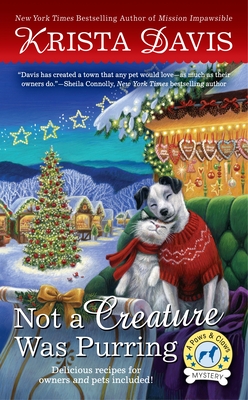 Not a Creature Was Purring (A Paws & Claws Mystery #5)

Inn owner Holly Miller finds it ruff staying cheerful over the holidays when the dead body of a beloved businessman turns up in the pet-friendly town of Wagtail, Virginia.

Inspired by her German heritage, Holly’s grandmother has arranged for Wagtail to have a Christkindl Market packed with goodies and decorations for the howliday tourists. But Holly’s mood takes an unseasonable turn when she learns that her old flame and childhood friend Holmes Richardson has brought his fiancée home—and she’ll be staying at the Sugar Maple Inn…

A love triangle becomes the last thing on Holly’s mind when her Jack Russell Trixie’s nose for trouble leads her to the corpse of a pet clothing tycoon. Now Holly and her dedicated detectives—Trixie and Twinkletoes the cat—must sniff out the killer to keep Christmas from going to the dogs…

“Touches all the bases of the cozy mystery—including a bit of romance—and does so with style.”—Richmond Times-Dispatch

KRISTA DAVIS is the New York Times bestselling author of the Paws & Claws Mysteries, including Mission Impawsible, Murder Most Howl, The Ghost and Mrs. Mewer, and Murder, She Barked, as well as the Domestic Diva Mysteries, including The Diva Serves High Tea, The Diva Steals a Chocolate Kiss, and The Diva Wraps It Up. She lives in the Blue Ridge Mountains of Virginia with a brood of cats and dogs, including a snoopy Jack Russell terrier and a nosy calico cat. Her friends and family complain about being guinea pigs for her recipes, but she notices that they keep coming back for more.
Loading...
or support indie stores by buying on