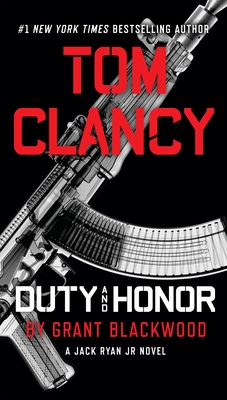 Jack Ryan Jr. is caught in the cross-hairs of a would-be tyrant in this exhilarating thriller in Tom Clancy's #1 New York Times bestselling series.

Jack Ryan, Jr., is on his own. He's been ousted from his position at the Campus, the off-the-books intelligence agency that was set up by his father, the President. As if that's not bad enough, someone is out for Jack‘s blood. The police think that he was just the victim of a mugging, but he knows a professional assassin when he kills one.

Using clues found on his would-be dispatcher, Jack launches his own shadow campaign to uncover the brutal truth about a world-renowned philanthropist and human rights advocate—and a long-running false-flag war of terror that has claimed thousands of lives....

“Action-adventure addicts will get their fixes.”—Kirkus Reviews

Grant Blackwood is the New York Times bestselling author of the Briggs Tanner series (End of Enemies, Wall of Night, and Echo of War). He is coauthor of the #1 New York Times bestseller Dead or Alive, with Tom Clancy, and of the thriller The Kill Switch, with James Rollins. A U.S. Navy veteran, Grant spent three years aboard a guided missile frigate as an Operations Specialist and a Pilot Rescue Swimmer. He lives in Arizona, where he is working on his own stand-alone series starring a new hero.
Loading...
or support indie stores by buying on