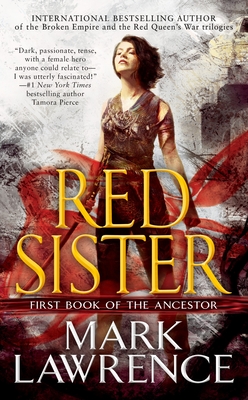 Red Sister (Book of the Ancestor #1)

The international bestselling author of the Broken Empire and the Red Queen’s War trilogies begins a stunning epic fantasy series about a secretive order of holy warriors...

At the Convent of Sweet Mercy, young girls are raised to be killers. In some few children the old bloods show, gifting rare talents that can be honed to deadly or mystic effect. But even the mistresses of sword and shadow don’t truly understand what they have purchased when Nona Grey is brought to their halls.

A bloodstained child of nine falsely accused of murder, guilty of worse, Nona is stolen from the shadow of the noose. It takes ten years to educate a Red Sister in the ways of blade and fist, but under Abbess Glass’s care there is much more to learn than the arts of death. Among her class Nona finds a new family—and new enemies.

Despite the security and isolation of the convent, Nona’s secret and violent past finds her out, drawing with it the tangled politics of a crumbling empire. Her arrival sparks old feuds to life, igniting vicious struggles within the church and even drawing the eye of the emperor himself.

Beneath a dying sun, Nona Grey must master her inner demons, then loose them on those who stand in her way.

Praise For Red Sister (Book of the Ancestor #1)…

“Fabulous, in-depth world building, great characters, and as always with Lawrence, plotting that is fresh and unpredictable...If you like fresh, take-no-prisoners fantasy, this is for you.”—Rick Riordan, #1 New York Times bestselling author of The Burning Maze

“The lyrical excellence of previous books is present in full force here and it’s fair to say that Mark Lawrence has evolved into a master of his craft. In Red Sister he has produced a novel that is as thought provoking as it is entertaining, and as poignant as it is ferocious. Highly recommended.”—Anthony Ryan, New York Times bestselling author of The Waking Fire

“In this stunning, action-filled series launch, Lawrence ('Broken Empire' trilogy) establishes a fantastic world in which religion and politics are sharp as swords, with magic and might held in the hands of wonderful and dangerous women. Impatient George R.R. Martin fans will find this a pleasing alternative until the next installment in his “A Song of Ice and Fire” saga arrives.”—Library Journal, starred review

Praise for the novels of Mark Lawrence

“Different than anything I have ever read.”—Terry Brooks, New York Times bestselling author

“An amazing series, and I eagerly anticipate Lawrence’s next literary effort, whatever it may be.”—Peter V. Brett, New York Times bestselling author

“Epic fantasy on a George R. R. Martin scale but on speed.”—Fixed on Fantasy

“Mark Lawrence’s growing army of fans will relish this rollicking new adventure and look forward to the next one.”—Daily Mail