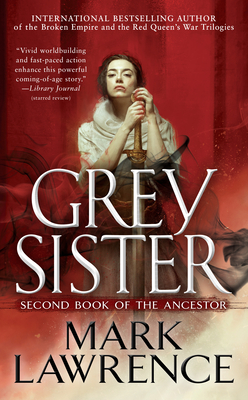 Grey Sister (Book of the Ancestor #2)

The second novel in a brilliant fantasy trilogy from the international bestselling author of Prince of Thorns.

Behind its walls, the Convent of Sweet Mercy has trained young girls to hone their skills for centuries. In Mystic Class, Novice Nona Grey has begun to learn the secrets of the universe. But so often even the deepest truths just make our choices harder. Before she leaves the convent, Nona must choose which order to dedicate herself to—and whether her path will lead to a life of prayer and service or one of the blade and the fist.

All that stands between her and these choices are the pride of a thwarted assassin, the designs of a would-be empress wielding the Inquisition like a knife, and the vengeance of the empire's richest lord.

As the world narrows around her, and her enemies attack her through the system she is sworn to, Nona must find her own path despite the competing pulls of friendship, revenge, ambition, and loyalty.

And in all this only one thing is certain: there will be blood.

Praise For Grey Sister (Book of the Ancestor #2)…

"Lawrence’s suspenseful account of Nona’s efforts to complete her training and gain control over her powers balances action and introspection, and will keep readers hooked."—Publishers Weekly

“The lyrical excellence of previous books is present in full force here and it’s fair to say that Mark Lawrence has evolved into a master of his craft. In Red Sister he has produced a novel that is as thought provoking as it is entertaining, and as poignant as it is ferocious. Highly recommended.”—Anthony Ryan, New York Times bestselling author of The Legion of Flame

“In this stunning, action-filled series launch, Lawrence ('Broken Empire' trilogy) establishes a fantastic world in which religion and politics are sharp as swords, with magic and might held in the hands of wonderful and dangerous women. Impatient George R.R. Martin fans will find this a pleasing alternative until the next installment in his “A Song of Ice and Fire” saga arrives.”—Library Journal (starred review)

Mark Lawrence is the author of the Broken Empire trilogy, the Red Queen's War trilogy, and the Book of the Ancestor trilogy, and a former research scientist working on artificial intelligence. He is a dual national with both British and American citizenship, and has held secret-level clearance with both governments.
Loading...
or support indie stores by buying on