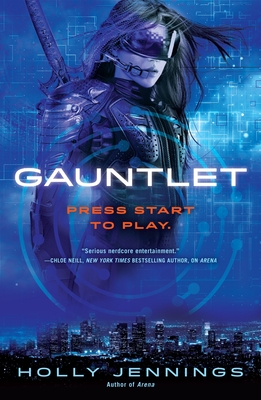 Plug back into the dangerous world of virtual gaming, in the next thrilling novel from the author of Arena.

Kali Ling has faced down death hundreds of times for the entertainment of millions. She knows fear—and she knows what’s truly terrifying...

There’s a new game in town. A brutal, winner-takes-all, international video game tournament showcasing the world’s most elite players, promising fame, prestige, and unbelievable fortune. But there’s a catch. The game uses new VR pods guaranteed to push digital warriors to their physical and psychological brink—adapting every time a gamer makes a move.

As the first female captain and youngest team owner in VGL history, Kali is used to defying the odds. But as the all-star tournament heats up, her determination begins to waver and the pressures of media, sponsors, and the game itself begin to put cracks in her hard-set convictions—and strain on her relationship with the one person who matters most.

If Kali and her teammates are to survive, they’ll have to find a way to be stronger than ever before. But battling the system may prove too difficult for even the most hardened of fighters...

“Stunning...Fast-paced, action-packed, with an interesting romance and a compelling yet flawed heroine…Read this book. You haven’t read anything quite like it and you don’t want to miss it.”—Ilona Andrews, #1 New York Times bestselling author of the Kate Daniels series

“A nuanced and complex novel with a strong, imperfect heroine and a different approach to the ‘rebel in a dystopian society’ trope.”—RT Book Reviews

Holly Jennings is a lifelong gamer who has spent innumerable hours playing World of Warcraft and Call of Duty. She is the author of the Arena novels, including Gauntlet and Arena.
Loading...
or
Not Currently Available for Direct Purchase