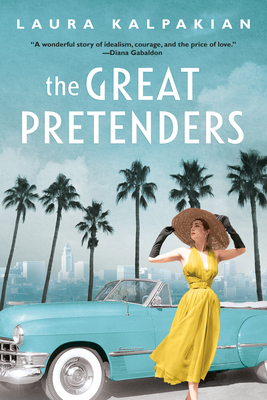 The daughter of Hollywood royalty, Roxanne Granville is used to getting what she wants—even if she has to break the rules. But after a falling-out with her grandfather, a powerful movie mogul, she has to face life on her own for the first time.…

Roxanne forges a career unique for women in the 1950s, becoming an agent for hungry young screenwriters. She struggles to be taken seriously by the men who rule Hollywood and who often assume that sexual favors are just a part of doing business. When she sells a script by a blacklisted writer under the name of a willing front man, more exiled writers seek her help. Roxanne wades into a world murky with duplicity and deception, and she can’t afford any more risks.

Then she meets Terrence Dexter, a compelling African American journalist unlike anyone she’s ever known. Roxanne again breaks the rules, and is quickly swept up in a passionate relationship with very real dangers that could destroy everything she’s carefully built.

Roxanne Granville is a woman who bravely defies convention. She won’t let men make all the rules, and won’t let skin color determine whom she can love. The Great Pretenders is a riveting, emotional novel that resonates in today’s world, and reminds us that some things are worth fighting for.

Praise For The Great Pretenders…

Praise for The Great Pretenders

"What a good book! Engagingly readable, full of Golden Age of Hollywood glitz--and a wonderful story of idealism, courage and the price of love. Enjoyed every page!"—Diana Gabaldon, #1 New York Times bestselling author of Outlander

"In her riveting new novel, Laura Kalpakian has given us a heroine to cheer for in this juicy tale of Hollywood. Roxanne Granville’s journey from diffident daughter of privilege to boundary-shattering career woman who takes on both the Hollywood blacklist and the racial prejudices of the early Civil Rights era is breathtaking and moving, even epic.”—Melanie Benjamin, New York Times bestselling author of The Girls in the Picture

“This empowering historical fiction novel reminds women everywhere that they’re capable of anything they put their minds to.”—Brit & Co

“Brave and confident, [Roxanne] refuses to let men make all the rules.”—She Reads

"Both a wild romp through glittering 1950s Hollywood, and a poignant journey of love and courage in the blacklist-era of the silver screen. I was swept away by the passionate story and whip-smart writing. Laura Kalpakian's clever prose introduces us to a vibrant woman we can admire--a woman both brave and vulnerable. After one fearless choice, her life seems to careen toward certain wreckage, yet Roxanne is there to show us that integrity and love are the conquering powers. Deeply moving, intelligent and charming, this is a story to savor. "—Patti Callahan Henry, New York Times bestselling author of The Bookshop at Water’s End

"A fascinating journey into the intrigues and hypocrisies of 1950s Hollywood, coupled with an indomitable heroine who dares to shatter the rules. Exciting, fast-paced, and revelatory.”—C.W. Gortner, author of The Romanov Empress

"Set against the glitter of Hollywood during the McCarthy era, one courageous woman, forced to start anew, reinvents herself as an agent and ends up selling blacklisted scripts. The screenwriters she represents are every bit as forbidden as the African American man she falls in love with. Kalpakian has written a timely story that deftly deals with racism and the fight for justice. The Great Pretenders is poignant, touching and often filled with laugh-out-loud wit.”—Renée Rosen, author of Park Avenue Summer

Laura Kalpakian has won a National Endowment for the Arts Fellowship, a Pushcart Prize, the Pacific Northwest Booksellers' Award, the Anahid Award for an American writer of Armenian descent, the PEN West Award, and the Stand International Short Fiction Competition. She has had residencies at the Virginia Center for the Creative Arts, the Montalvo Center for the Arts, and Hawthornden Castle in Scotland. She is the author of multiple novels and over a hundred stories published in collections, anthologies, literary journals and magazines in the U.S. and the U.K. A native of California, Laura lives in the Pacific Northwest.
Loading...
or
Not Currently Available for Direct Purchase