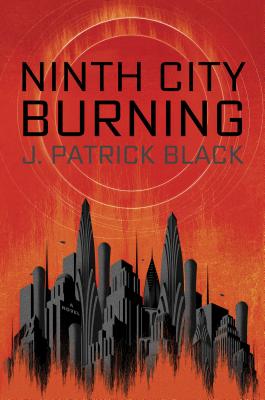 Ninth City Burning (War of the Realms Novel, A #1)

Cities vanished, gone in flashes of world-shattering destruction. An alien race had come to make Earth theirs, bringing a power so far beyond human technology it seemed like magic. It was nearly the end of the world—until we learned to seize the power, and use it to fight back.

The war has raged for five centuries. For a cadet like Jax, one of the few who can harness the enemy’s universe-altering force, that means growing up in an elite military academy, training for battle at the front—and hoping he is ready. For Naomi, young nomad roaming the wilds of a ruined Earth, it means a daily fight for survival against the savage raiders who threaten her caravan.

When a new attack looms, these two young warriors find their paths suddenly intertwined. Together with a gifted but reckless military commander, a factory worker drafted as cannon fodder, a wild and beautiful gunfighter, and a brilliant scientist with nothing to lose—they must find a way to turn back the coming invasion, or see their home finally and completely destroyed.

Praise For Ninth City Burning (War of the Realms Novel, A #1)…

"Grabbed my attention from the first page—fresh and un-put-downable. An intriguing cocktail of science fiction, fantasy, and military adventure stirred into something new and satisfying."—Patricia Briggs, #1 New York Times bestselling author of Fire Touched

“Fans of Ender, Harry Potter, Starship Troopers, and manga-style armored mobile suits will find Black’s debut the perfect ticket to a fantastic new world…This thrilling kickoff to an action-packed series will appeal to those who enjoy science fiction mixed with fantasy.” –Booklist

“Black is a fresh new voice who pays respect to the classics of SF in this enjoyable adventure debut…Given this strong foundation, readers can expect more thrilling adventures from this new author.”—Publishers Weekly

"Ninth City Burning is an intense, complex, engrossing story, a tale of multiple lives intersecting… Fans of both fantasy and science-fiction will want to keep an eye out for the next, and the next… "—Jean Johnson, national bestselling author of The Terrans

J. Patrick Black has worked as a bartender, a small-town lawyer, a home builder, and a costumed theme-park character, all while living a secret double life as a fiction writer. While fiction is now his profession, he still finds occasion to ply his other trades as well. He lives in Boston, Massachusetts, where he likes to visit the ocean. Ninth City Burning is his first novel.
Loading...
or
Not Currently Available for Direct Purchase