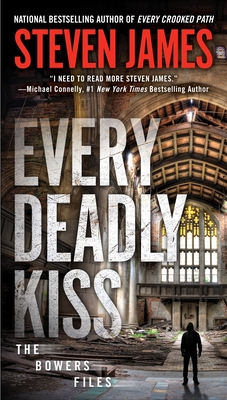 Every Deadly Kiss (The Bowers Files #10)

FBI special agent Patrick Bowers grapples with a baffling series of murders in Detroit—and discovers a terror plot with roots that stretch back centuries.

Called in by an ex-girlfriend to consult on a case, Patrick encounters the work of a killer who displays a stunning degree of ruthlessness. Bowers is shocked to find that the slayings are linked not just to his own history with a known terrorist, but to his former lover as well—and that her secret past might hold the key to stopping the crime spree. As layers of intrigue peel away, the city is pushed ever closer to a seemingly unstoppable bioweapon attack.

Unnerving and laced with breathtaking suspense, Every Deadly Kiss is a surprising and complex thriller that will keep readers obsessed to the final page.

Praise For Every Deadly Kiss (The Bowers Files #10)…

Praise for the novels of Steven James

“From the first chapter, it sets its hook deep and drags you through a darkly gripping story with relentless power.”—Michael Connelly, New York Times bestselling author of The Wrong Side of Goodbye

“Pushes the envelope to the edge and beyond.”—Steve Berry, New York Times bestselling author of The 14th Colony

“James writes smart, taut, high-octane thrillers. But be warned—his books are not for the timid. The endings blow me away every time.”—Mitch Galin, producer of Stephen King’s The Stand and Frank Herbert’s Dune

“High tension all the way...  Fast, sharp, and believable. Put it at the top of your list.”—John Lutz, Edgar Award–winning author of Single White Female and Slaughter

Steven James is the national bestselling author of a dozen novels, including the critically acclaimed thrillers Every Crooked Path, Checkmate, The King, Opening Moves, and The Queen. He has won three Christy Awards for best suspense and was a finalist for an International Thriller Award. His thriller The Bishop was named Suspense Magazine’s book of the year. Publishers Weekly calls him “[a] master storyteller at the peak of his game.” He has a master’s degree in storytelling and has taught writing and creative communication around the world.
Loading...
or
Not Currently Available for Direct Purchase