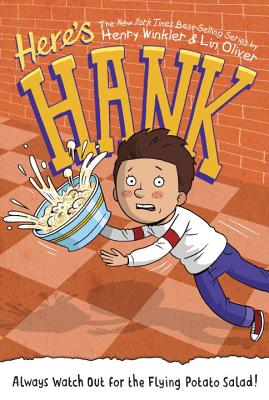 Always Watch Out for the Flying Potato Salad! #9 (Here's Hank #9)

Hank is back and gets to work in the ninth book in the series—this time, he finds himself in quite the pickle!

When Hank goes with his mom to her deli for Take Your Child to Work Day, he learns that he doesn't have the greatest talent as a deli worker. He messes up all the sandwiches and has to deal with one very unsatisfied customer—his arch-rival, Nick McKelty! So when an important order comes in, Hank only has one chance to get it right, or the eggs won’t be the only things that are fried!

Lin Oliver is a writer and producer of movies, books, and television series for children and families. She has written more than twenty-five novels for children, and one hundred episodes of television. She is cofounder and executive director of the Society of Children's Book Writers and Illustrators, an international organization of twenty thousand authors and illustrators of children's books.
Loading...
or support indie stores by buying on
(This book is on backorder)