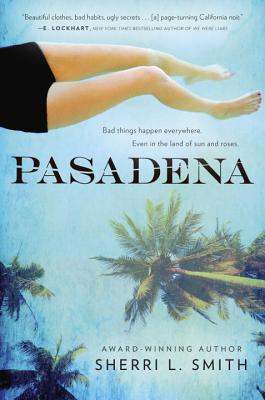 Bad things happen everywhere. Even in the land of sun and roses.

When Jude's best friend is found dead in a swimming pool, her family calls it an accident. Her friends call it suicide. But Jude calls it what it is: murder. And someone has to pay.

Now everyone is a suspect—family and friends alike. And Jude is digging up the past like bones from a shallow grave. Anything to get closer to the truth. But that's the thing about secrets. Once they start turning up, nothing is sacred. And Jude's got a few skeletons of her own.

In a homage to the great noir stories of Los Angeles, award-winning author Sherri L. Smith's Pasadena is a tale of love, damage and salvation set against the backdrop of California's City of Roses.

Sherri L. Smith (www.sherrilsmith.com) is the author of several novels for young adults, including the critically acclaimed Flygirl, Orleans, and The Toymaker's Apprentice. She lives in Los Angeles, California. Follow her on Twitter: @Sherri_L_Smith

"Enthralling! From page one, I was inside the life (and death) of Pasadena. Smith has created a world that is at once startlingly real and heartbreakingly unreal. Smith’s novel had me leaning forward in my seat trying to remember to breathe. In Jude, there is some of all of us—knowing deep truths but hoping for something else, hoping somehow to change a history already set in motion."—Jacqueline Woodson, National Book Award-winning author of Brown Girl Dreaming

"Beautiful clothes, bad habits, ugly secrets: Sherri L. Smith probes the vulnerable underbellies of a lot of toothy sharks in this page-turning California noir. Pasadena is stylish and still sad, chilling and still hopeful, open-hearted and still mysterious. Smith is an author with astonishing range and she’s a stellar storyteller."—E. Lockhart, New York Times bestselling author of We Were Liars

"Impossible to put down . . . . Fascinating, tragic, and equal parts glossy and gritty, this is a noir investigation of familial expectations, tension, and turmoil."—School Library Journal

"Jude is a tough nut, but as the story unfolds, so does she . . . . A stylish exploration of loss."—Kirkus Reviews

"[A] deeply tragic and darkly humorous tale . . . . Jude—who, through Smith’s keen narrative voice, is a sharp and often biting observer of human nature—tries to reconstruct Maggie’s final days, pulling from her own memories of a friend who knew her like no one else. Turns out, Maggie played that role for several people, yet no one truly knew her, an often heartbreaking paradox of teenage friendship that Smith explores deftly."—Publishers Weekly

"The touch of noir adds just enough grit and heat to the narrative, conveying Jude’s emotional and physical environment effectively. This is a moving and well-written exploration of friendship and loss."—Booklist

"In this sleek, fast-paced psychological mystery, Sherri L. Smith introduces teen readers to the classic conventions of California noir, with its shimmering veneer that can't quite conceal a deep well of darkness."—Chicago Tribune

"Jude leaves no holds barred in her laser-like determination to find the truth, and the secrets that eventually surface, in Smith’s beautifully crafted and suspenseful novel, come as a surprise."—The Buffalo News

* Smith’s Pasadena compares with classic 1940s noir films, such as The Big Sleep, Laura, and The Maltese Falcon. The novel captures the pain of mourning and the desperate search for answers which can never satisfy.—VOYA, starred review
or
Not Currently Available for Direct Purchase
Copyright © 2020 American Booksellers Association