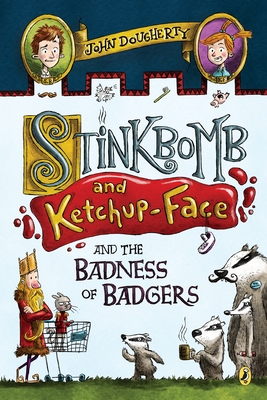 Stinkbomb and Ketchup-Face and the Badness of Badgers (Paperback)

A hilarious send-up of fantasy quest novels, perfect for fans of Adam Gidwitz and Jon Scieszka.

Welcome to the kingdom of Great Kerfuffle!

Great Kerfuffle is really great. And there's usually a kerfuffle (the clue's in the name really). This particular kerfuffle started the day Stinkbomb's twenty dollar bill went missing. Stinkbomb and his little sister Ketchup-Face know exactly who took it: the badgers. After all, they're called badgers because they do bad things; otherwise they'd just be gers.

They bring news of the badgers' treachery to King Toothbrush Weasel (don't get us started on the story behind his name…), who sends them on a quest to rid the land of badgers. What follows is a full on kerfuffle-fest, containing:  one deep dark forest, a grocery cart in distress, a song about jam--and, of course, a band of very tricky badgers.

Be prepared to laugh your socks off, and maybe your ears, too.

John Dougherty was born in Larne, Northern Ireland. He studied psychology at university and then tried his hand at a number of jobs including YMCA hostel worker, factory machine operator, and unsuccessful singer-songwriter, before becoming a primary school teacher (elementary school teacher if you're in the United States, which he wasn't).

While John was teaching, his interest in children's literature was reawakened and he soon began writing stories and pestering publishers with them. His books have been shortlisted for a number of prestigious awards - and one was chosen by The London Times as one of the Best Children's Books of the Year 2011 - but, more importantly, they make children giggle.

Praise For Stinkbomb and Ketchup-Face and the Badness of Badgers…

"Exuberantly silly from start to finish . . . Dougherty packs his story with winking references to adventure story tropes, as well as self-referential, metafictional humor (’Do you mean you’re in a story now?’ the king asks the children. ‘Oh, yes,’ responds Ketchup-Face. ‘You can tell because of all the chapters and page numbers and stuff’). Between playful typography, a nearly nonstop onslaught of jokes, and Ricks’s jittery b&w cartooning, it’s a solid choice for readers who have exhausted the Captain Underpants library." —Publishers Weekly

"Take a dollop of Jon Scieszka's classic fairy-tale sendups, add a swirl of M.T. Anderson's humorously perilous quests, garnish with a Snicket-ian narrator's crumbled fourth wall, and you have the hilarious first adventure of Stinkbomb and Ketchup-Face on the island of Great Kerfuffle. . . . With metafictive flare, a truly expert deployment of absurdity, and an unrelenting song about jam, Dougherty's narrative is as self-reflexive and entrancing as a Penrose staircase, populated with delightfully inscrutable characters and brought to rollicking life with Ricks' spot illustrations."—Kirkus Reviews

"Loaded with silliness and adventure . . . Ketchup-Face’s boisterous personality bounces the story along, and the scheming badgers—complete with evil false mustaches—make amusing villains. . . The playful tone and slapstick humor will draw in youngsters." —Booklist

"Stinkbomb and Ketchup-Face are a mischief-making brother and sister who are not afraid to make a mess or strike out on their own adventure."—School Library Journal

"Slapstick humor abounds in this illustrated easy chapter book that is sure to be popular with fans of Dav Pikley and Jon Scieszka."—School Library Connection
or support indie stores by buying on
Copyright © 2020 American Booksellers Association