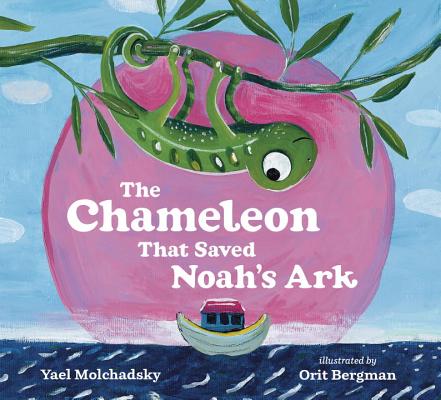 It’s mealtime on the ark!

Striking folk-art-style paintings illustrate this charming tale about the purpose of every creature and the harmony of nature.

Noah and his family work hard to keep all the animals on the ark happy and well-fed. They find just the right food for every creature—except for the two chameleons. These picky eaters won’t eat anything! Noah is worried! What will tempt these two? It is not until the ark’s food supply is suddenly threatened, that Noah gets a surprising answer—and discovers that even the SMALLEST creatures have a BIG role to play in nature!

Yael Molchadsky is the director of the Children’s and YA department at Kinneret-Zmora-Dvir publishing house in Israel. She is also the editor of the prestigious Marganit series, which aims to bring literary translated fiction to young Hebrew readers. Yael has translated picture books from English and German and is a sought-after speaker on Children’s and YA literature. The Chameleon that Saved Noah’s Ark is her first book for children.

Orit Bergman (www.oritbergman.com) is an illustrator and a writer of children’s books. Her work has been featured in many exhibitions and won numerous awards, among them a medal from the Society of Illustrators NYC, prizes from the Israel Museum, Bologna book fair, and the Israel Ministry of Culture. She teaches illustration at the Bezalel Academy of Arts and Design in Jerusalem. She lives with her family in a small village on the slopes of Mt. Carmel, where she writes, paints, works in her vegetable garden, and enjoys the company of her chickens.

Praise For The Chameleon that Saved Noah's Ark…

* “Charming extension of a well-known Bible story. . . . In a refreshing departure, Molchadsky chooses to highlight Noah’s wife, Na’ama, in a central role, departing from so many retellings that relegate everyone but Noah to the background. The visually and warmly surprising multiethnic family, representing many shades and skin colors, attempts to keep the matching animals happy and well-fed . . . leaving readers to remember that ‘everything and everyone has a place under the sun.’ Bergman’s folk-art-style paintings are colorful and textured, investing all the ark’s passengers with great personality. . . . This delightful narrative balances respect for tradition with inviting, accessible storytelling; a very well-executed debut for children and an appealing addition to family reading time.”—Kirkus Reviews, starred review

* “Life on the ark keeps Noah and his family hopping, but he still cares about every creature on board. . . . Bergman uses Mediterranean-hued acrylics and a playful sense of composition to immerse readers in an ark that’s joyfully busy 24/7. Her Noah is an equally wonderful creation: a man with soulful eyes and boundless energy, an approachable patriarch of a multiracial family. . . . It’s easy to infer why Noah was entrusted with keeping the ‘wonders of nature’ safe.”—Publishers Weekly, starred review

“This endearing picture book is a circle-of-life narrative. . . . Bergman subtly infuses a touch of feminism (it is the female chameleon that shows the family the answer) and racial justice (Noah has brown skin, and his three sons and wife vary in color) in his illustrations. . . . A utopia of contented animals and a loving family living together, all sharing equal time in the pictures. This resplendent book celebrates the miracle of nature, making the happy ending not about the end of a flood, but about everyone finding what they need.”—The Horn Book

“Vivid acrylic illustrations. Bergman’s even, colorful style is detailed and expressive enough to give distinction to each character; the sea is active and turbulent, Noah’s red-haired son Ham is particularly curious, and many of the animals are observant and intrigued by the goings-on. The message is clear: nature is full of wonders, and everyone has a place in the sun.”—Booklist
or
Not Currently Available for Direct Purchase
Copyright © 2020 American Booksellers Association