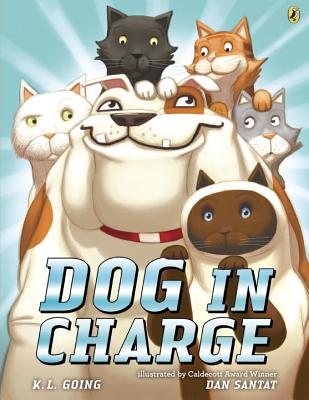 Dog can Sit.
He can Stay.
He can even Dance.
But when he's in charge, can he keep the cats in line?
All one, two, three, four, five of them?

* "With skillful use of repetition, an agreeable and entertaining animal cast, and a tidy ending of the best kind, dog people and cat people alike have reason to approve."—Publishers Weekly, starred review


Praise For Dog in Charge…

* "Printz-winner Going aces her picture-book debut with this comical saga of a tutu-wearing bulldog...a treat for all pet lovers."—School Library Journal, starred review

* "With skillful use of repetition, an agreeable and entertaining animal cast, and a tidy ending of the best kind, dog people and cat people alike have reason to approve."—Publishers Weekly, starred review

"The stylized illustration on the jacket is a scene of comic bliss."—Children's Literature

K. L. Going (klgoing.com) lives with her family in the Hudson Valley area of New York State. Since graduating from college she has worked as an adult literacy tutor, a ticket agent for a major airline, a front desk clerk at a resort hotel, and an assistant in a Manhattan literary agency. She has lived in Maine, Oregon, Pennsylvania, Louisiana and New York. K.L. is the author of many books, including Fat Kid Rules The World, The Liberation of Gabriel King, and Dog in Charge. Her first novel, Fat Kid Rules the World, was a YALSA Michael L. Printz honor book.


Dan Santat (www.dantat.com) works as a children's book creator and commercial illustrator. He won the 2015 Caldecott Medal for The Adventures of Beekle. He is also the creator of Disney's animated hit, "The Replacements." Dan graduated with honors from the Art Center College of Design in Pasadena, California. He lives with his wife, two kids, a rabbit, a bird, and one cat.
Loading...
or
Not Currently Available for Direct Purchase