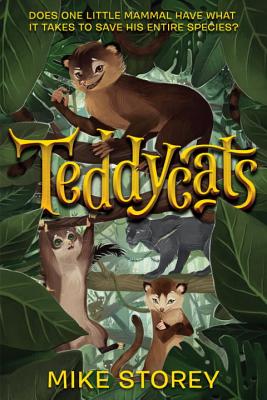 Bill is a young Teddycat, which means he’s one of the most special--and mysterious--animals in the jungle. Teddycats can climb higher than any other mammal around. And because the Teddycats can climb so high, they get to live way up in the highest branches of the tallest trees, in a well-hidden and protected place called Cloud Kingdom.

There are a lot of perks to Teddycat life, but there’s also a lot of responsibility--and rules--that come with it.

Here are some things that Teddycats CANNOT do:

• Use their super-strong, razor-sharp claws for anything except climbing or life-or-death situations
• Reveal their existence or the location of Cloud Kingdom to humans and other predators

And the number one thing that Teddycats can definitely, no matter what, NEVER do:

That last rule is the most serious one of all. Unfortunately, it’s also the rule that Bill breaks one fateful day, when he brings his buddy Luke, an Olingo, up into Cloud Kingdom. All of a sudden, predators are circling, the ground beneath Cloud Kingdom is littered with human traps, and the Teddycat sanctuary is under attack. Their secret has been exposed, and Bill’s in danger of being banished for his crime.
When a baby Teddycat is trapped and taken by a potentially vicious human, Bill knows he has to make things right. Along with a brave but ragtag team of comrades, he sets out into the jungle, determined to fight for the future of his species.

Will curiosity kill the Teddycats? Or will Bill find a way to claw his way out of this mess?

Mike Storey is a writer and teacher living in Kittery, Maine. He holds an MFA from the University of Virginia. This is his first novel for children. Follow him on Twitter @MikeStoreyWrite.
or
Not Currently Available for Direct Purchase
Copyright © 2020 American Booksellers Association