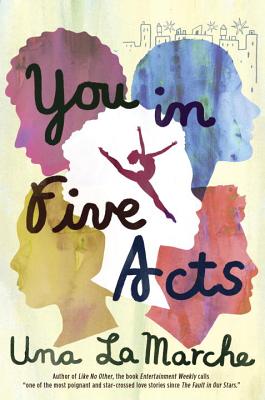 You in Five Acts

The latest contemporary novel from Una LaMarche, acclaimed author of Five Summers, Like No Other, and Don’t Fail Me Now. In the high-pressure months leading up to the performance that will determine their futures, a group of friends at a performing arts school look back on when an unexpected event upended everything.

It's always been you—you know that, right?

At a prestigious New York City performing arts school, five friends connect over one dream of stardom. But for Joy, Diego, Liv, Ethan and Dave, that dream falters under the pressure of second-semester, Senior year. Ambitions shift and change, new emotions rush to the surface, and a sense of urgency pulses between them: Their time together is running out.

Diego hopes to get out of the friend zone. Liv wants to escape, losing herself in fantasies of the new guy. Ethan conspires to turn his muse into his girlfriend. Dave pines for the drama queen. And if Joy doesn’t open her eyes, she could lose the love that’s been in front of her all along.

An epic ensemble piece in the vein of Fame and Let’s Get Lost, You in Five Acts is a eulogy for a friendship—the heartbreaks, the betrayals, the inside jokes, the remember-whens. And the tragedy that changed everything.

Praise For You in Five Acts…

"Author Una LaMarche beautifully captures street scenes in New York City and breathes life into the school setting. Perhaps the strongest elements of You in Five Acts are the friendships between these characters and the different ways their dedication to art can be a saving grace or a curse.” —BookPage

"LaMarche develops her racially diverse cast of characters well over the book’s five acts, giving a strong sense of their ambitions, frustrations, and interlocking relationships that hover uncomfortably between friendship and love." —Publishers Weekly

"LaMarche crafts the novel in five parts, each narrated by one of the main characters. The protagonists are diverse, intelligent, and solidly teen in their perspectives. Each voice is distinct and recognizable. From the beginning, the story is counting down to a culminating event, and the author is able to develop suspense but also keep the book humorous and romantic. The conclusion is heartrending and timely but also unexpected and fresh. Different points of view keep the work moving at a fast pace and add to its compulsive readability." —School Library Journal

"LaMarche perfectly captures the competitive, high-stakes atmosphere of professional-track ballet through the eyes of a refreshingly strong protagonist who you can't help but root for. I loved it from beginning to end." —Sophie Flack, author of Bunheads

Una LaMarche is a writer and journalist whose work has appeared regularly in the New York Observer and on the Huffington Post. She is the author of Five Summers, Like No Other, Don't Fail Me Now, and Unabrow, a collection of humorous essays based on some of her more questionable life choices. Una lives in Brooklyn with her husband and son. Find out more at unalamarche.com or follow her on Twitter @sassycurmudgeon
Loading...
or
Not Currently Available for Direct Purchase