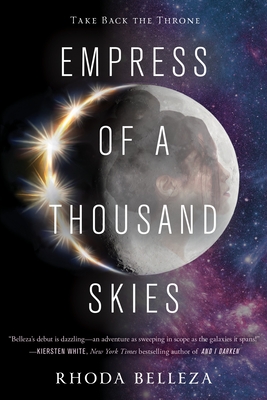 Praise For Empress of a Thousand Skies…

“This is a multiplanet, multiculture, multitech world and a timely tale. An exceptionally satisfying series opener.” —Kirkus Reviews, Starred Review

"Fans of calculating political maneuvering and expansive, interplanetary plots will find much to enjoy in Belleza’s Firefly-esque debut." —Publishers Weekly

“Belleza creates a thrilling world filled with deception, war, friendship, and love… a good next read for YA fans of Marissa Meyer’s “The Lunar Chronicles” series.” —School Library Journal

“Fans of Marissa Meyer’s Lunar Chronicles and especially readers of Lewis’ Stitching Snow will find much to like in this thrilling yet thoughtful intergalactic ride.” —BCCB

“Belleza’s ambitious debut lays the groundwork for what is sure to be a rich sci-fi series full of political plots and worlds on the brink of war, futuristic biotechnologies reminiscent of M. T. Anderson’s Feed (2002), and startling plot twists.”—Booklist

“Empress of a Thousand Skies will compel fans of series such as Marissa Meyer’s The Lunar Chronicle; Victoria Aveyard’s The Red Queen; Beth Revis’s Across the Universe; and George Lucas’s Star Wars. Belleza’s exciting novel debut will make readers desperate for the next book to complete this duology.”—VOYA

“Belleza's debut is dazzling--an adventure as sweeping in scope as the galaxies it spans!”
—Kiersten White, #1 New York Times bestselling author of And I Darken

“An epic space opera with all the elements of an addictive read--danger, deception, unlikely allies, and the fate of worlds hanging in the balance. A stunning debut.”
—Kami Garcia, #1 New York Times bestselling coauthor of Beautiful Creatures & author of The Lovely Reckless

“This book glitters like stars. With a heart-pounding plot, twisty secrets, and characters you can't help but root for, Empress of a Thousand Skies had me turning pages well into the night!”
—Beth Revis, New York Times bestselling author of the Across the Universe series