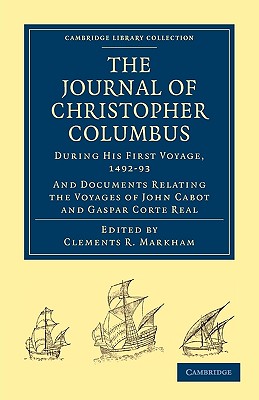 Journal of Christopher Columbus (During His First Voyage, 1492 93) (Paperback)

The publications of the Hakluyt Society (founded in 1846) made available edited (and sometimes translated) early accounts of exploration. The first series, which ran from 1847 to 1899, consists of 100 books containing published or previously unpublished works by authors from Christopher Columbus to Sir Francis Drake, and covering voyages to the New World, to China and Japan, to Russia and to Africa and India. Volume 86, published in 1893, contains a translation of the journal of Christopher Columbus during his first voyage, together with documents relating to the subsequent voyages of John and Sebastian Cabot and Gaspar Corte Real. Cabot was commissioned by Henry VII to explore in English interests. Less well known to most readers, Corte Real was a Portuguese who was sent by King Manuel I to look for a passage to Asia but seems to have reached only Greenland and north-east Canada before being lost.
or support indie stores by buying on
Copyright © 2020 American Booksellers Association